988958, Vargr female. Going to dig out the old Mongoose v1 Vargr book, which means I will need to adjust the stats. There is also a sub-species table, so that ended up being am Urzaeng, which ends up giving me +1 dexterity, +1 strength, and -2 intelligence. Ouch, but fortunately I did roll a bit above average there. And the 1d6 for the charisma is a 5 (1d6 + 2). UWP is now A88755.

Not particularly a fam of the entire sub-species thing (Mongoose made some decent choices early on for the most part, but the last few years they've gone off the deep end as far as I am concerned in how they treat Traveller. Too much Judge Dread/Warhammer 40K, not enough actually Traveller. At least in my opinion. But I am old and crotchety at times). However: the Urzaeng are one of the few Varg sub-species known to the Imperium, as well as not being outcast. They average 1.85 meters and 70kg. In theory they can take on an adult Aslan (yeah, no. The Aslan will out-mass even the Urzaeng Vargr by 30 kg of mostly muscle). Originally bred for heavy labor (and why would a hugely technologically advanced race need manual heavy laborers? You can see why there is some....disdain...for how Mongoose deals with things just to put their own spin on stuff. We can surely ignore 40 years of canon, why not. But I digress).

Career qualifications are based on charisma. If I read the chart correctly, with a charisma of 5 I can't do any of them other than loner. Thinking I've read it incorrectly, perhaps a charisma 6+ means I need to roll a 6+? I'll just go with the draft and have a random career as I am unsure what they are actually asking for here. As there is mention that Vargr are expected to change careers often, and a career can raise their charisma, I'm assuming unless you roll really well the draft is the only real choice to begin with. After that, admission is automatic if you have the moxie, err, charisma, for it. A 6 gives me law enforcement, any. I have 3 choices: enforcer, security or investigator. In comparing my stats for survival and promotions, going to go with enforcer as that gives me the best chance for a promotion, and they are all close to the same for survival. Enforcers are police, not the thug type of enforcer.

I survive and get promoted to rank 1, Corporal. This gives me another melee skill, so going with Unarmed Combat-1. Rolling on service skills I get Recon-1. I also saved the life of one of my pack members and gain an ally.

I barely survive, rolling a 6. And get promoted again to rank 2, sergeant. 2 Skill rolls: personal I get Gun Combat (Slug Pistol-1) and service skills Computer-1. An investigation took a dangerous turn! Fortunately, I succeeded, and I choose Jack-of-all-Trades-1 as a skill. Oh, and the sergeant rank gives me Streetwise-1.

I fail my survival roll! An investigation went critically wrong, and I failed, losing a charisma. My UWP is A98754 now. And I lose the benefit roll.

Rolling on each table I end up with Cr5,000 and some armor. Going to say she kept her flak jacket, which looks like a heavy leather coat for the most part. And why yes, it will be a duster-style to protect her legs as well.

Computer-1, Streetwise-1, Gun Combat (Slug Pistol-1), Recon-1, Melee (Unarmed Combat-1, Natural [teeth] 0), Jack of all Trades-1, Advocate-0, Stealth-0
Cr5,000, Duster-style flak jacket
Ou was a bruiser of a pup, and her pack perhaps pushed her into law enforcement to keep her on the right side of the law. She took to it like a canine to a squeaky toy and was consistently promoted until that fateful investigation where everything went sideways. She ended up on the wrong side of the review and was forced to leave her beloved service. Despite that, she still bears no ill-will to her clan, and in fact, a fellow officer owes her his life, and has promised to always keep that in mind if Ou ever needs help.
Ou is a large Vargr who really loves police work. She is quite talkative and while she'll talk to anyone, she also seems reticent to push her own opinion or take charge. She is competent at many things and can generally figure out something to get by even if not trained for it specifically. After her hearing, she feels a bit more unsure of herself and is looking for a strong leader or someone to join with as she is no longer with her birth pack.
On the station, she has, quite unconsciously, making rounds about the station. She keeps an eye on Red's Quarters and knows both Arlo and Kookie. She is vaguely aware that Pandra seems to notice her regular wanderings but has yet to make his acquaintance. She and Kookie often eat together and talk about their past and what brought them here. Both are looking for something to do to start earning credits. 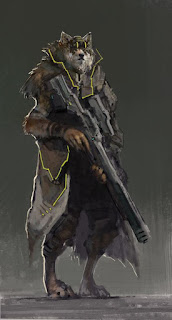 Ou in her duster flak jacket
Posted by Craig Oliver at 8:01 PM