Travis goes a-shopping. Unable to purchase normal cargo quantities measured in the dTons, Travis scours the down port for various items he hopes to sell for profit at Romar. After a pleasant evening with the Marquis Juliette Sung Ottowald of Mercactor on her yacht the Bonnie, the crew returns to Le Suroit for what was to be a peaceful evening.

In the morning, one of the two air/rafts was discovered AWOL, checked out by our young and apparently brash Quentin. Not long after the discovery, an Imperial Marine captain contacts the ship, with Quentin in custody. They retrieve the scientist, who is now no longer allowed on Trane. Travis shops and picks up items that may be more valuable at their next port of call, Romar. Among the items are several barrels of water - there is an Artesian Water bar on Romar where imported water goes for high prices, according to the Marquis.

Bidding farewell to Trane, they pilot the lab ship beyond the 100D limit as Travis creates the jump route.  With a flash, they enter jump spaces, lights dimming in the traditional Vilani manner.  The week in jump space goes quietly - Boris has some time to study physics this week, whereas Travis does not manage to successfully study his astrogation texts. We're assuming avarice thoughts occupied his mind this week.

Coming out of jump, they approach Romar. Romar is within the jump shadow of the primary star, so the trip to Romar in normal space takes most of a day.  Upon approaching the planet, there is the equivalent of an amber alert: a troop of Aslan scouts (Tyeyo Aueeah This is the Aslan Explorer Scouts) are missing! While the clan has ground vehicles searching, the addition of flying craft would greatly aid in the search.  Loading one of the air/rafts into the pinnace, the group flies down to

Arlyehyas to coordinate with the clan.  Quite fortuitously (rolling box cars) Travis spots a couple of shotgun wielding Aslan in a ravine, near the geki bush plantation.  Holding position in the pinnace, he radios back to the command center and Dr Boris.  The air/raft arrives shortly after that, as does the ground vehicles from the clan. They have the clan leader who attempts to parley with what is an illegal dustspice processing camp that the Tyeyo Aueeah managed to run into on their hike.

Initial parley did not go well as the clan leader got wounded by a shotgun.  Realizing that they had nowhere to go, the dustspice pirates made a deal: the air/raft for the Aslan children.  A quick decision was made, and Dr Boris relinquished the air/raft to the six well armed Aslan.  The children were reunited with their pride and families, and that's where we left off.
Posted by Craig Oliver at 8:52 PM No comments:

We did not play last weekend - there is always a lot to do in real life.

I'm hoping we'll get together after Thanksgiving this coming up weekend, finish up on Trane and make the jump to Romar.

Here's the link to the current WIP for the Romar guide. Pretty sure Romar is intended as Dune-lite, between the desert world and dustspice...  Romar Guide
Posted by Craig Oliver at 1:22 PM No comments:

It's a chilly world.

And after this weekend's Boy Scout backpacker, I'm working on Aslan Scouts. And a lost patrol that our heroes may have to do search & rescue on (fortunately our troop did not get lost despite me being directionally challenged!) 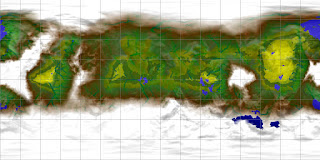 Posted by Craig Oliver at 12:12 PM No comments:

Romar is next on the flight plan. According to the Wiki (and Behind the Claw, and Mongoose Spinward Marches), Dustspice is harvested there. And there is a large population of Aslan.

So I am starting on the guide next.  A desert world, yet there is a 5% covering of very briny lakes where the geki plant thrives, which is where the dustspice comes from.

I believe I have far too much fun detailing the worlds, and most of the details never actually come into play. 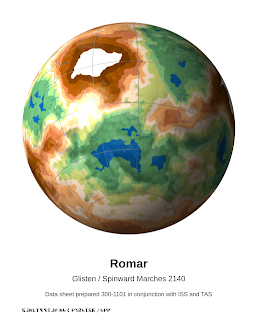 Posted by Craig Oliver at 8:59 AM No comments:

The Lysani Labs representative made it clear to call the starport and prep for the incoming scientists and crew. Loading them onto the shuttle took a couple of trips, and then, patients in the cargo area, Travis flew gently back to Trane where emergency vehicles were ready to take the survivors to Casphan's hospital.  Getting cleaned up, the crew also went to the hospital via a port grav vehicle, and got checked out to verify there were no ill effects from their experiences other than several bruises.

While there, the lab representative finally arrived from the island where the primary lab was located. Giving profuse thanks, our heroes got a financial reward.  They duly shared the reward amongst the crew, giving more shares for those who went to the Death Ship.

Released from the hospital, they plan to spend a few days enjoying the sites, and perhaps a bit of shopping with their cred sticks filled up.  They were visited with the Imperial Knight in Residence, Sir Craig (another Craig, not me. Really...) who also thanked them for their efforts in halting questionable research in Imperial space.  Who is also keeping an eye on these visitors.

So we'll do a bit of site seeing and shopping on the planet while the ship gets restocked and refueled. I've got a few equipment catalogs that they can peruse to see what sort of toys they want to get.  There is an Ancient site on the planet, well guarded, but Quentin (NPC archeologist on board Le Suroit) may really try to visit despite that.  And I'm expecting the Marquis they met on Glisten to show up in her yacht. She may or may not be headed to the same destination as our adventurers.

Then I'll get started on the next planet and detail that out far beyond what they will probably do. While T5 has the MOARN concept (Map Only As Really Needed I think)  the planet detail stuff is my fun thing to do.
Posted by Craig Oliver at 2:35 PM No comments:

Our intrepid adventures starting exploring the lab ship, a sister ship to their own. The lights were smashed or working, and the suits were cumbersome.   They found blood-stained floors, the blown up auxiliary lab, and the piles of bedding and tables. Eventually they found one of the scientists on board, Vanessa. With their lights shining, she went beserk due to the combat drugs in her system.  A brief scuffle ensued, but with four against one, they managed to subdue her, and with a tangle net found in the main lab, she was secured.  Immediately afterward they found the walk in freezer, complete with 16 partially eaten bodies hanging up.   Quentin, one of the NPCs, recognizing a former work mate, managed to throw up, but at least not in his helmet.  He stood watch over the scientist, while cleaning up, while the remaining party continued exploring.

Footsteps were heard running to the nearby cargo bay.  Catching the site of feet running up the curvature of the ship, they rushed after the receding boots to find the iris hatch closing behind them.  Cautiously opening the hatch, they call out to the other side, and speak with a somewhat paranoid, tattered crew member.  They subdue him and bring back to the stateroom with the scientist.

With significantly increased caution, they continued to explore the ship, now knowing there were two other survivors who may react badly.  With the dimmed or broken lights, Travis returned to the bridge to see about establishing the emergency lighting. Unfortunately, he ran into Mario, the surviving engineer. Reflexively he shined his lights at the other man, and triggered the beserk reaction. Clubbing the engineer only slowed him down again, and with a couple enhanced punches Travis was out cold. Fortunately, Franklin and Boris were running up the corridor, and with stunner blaster managed to knock out the engineer.  Witht he aid of science fiction smelling salts and the good doctors ministrations, Travis was back on his feet albeitly a tad fuzzy in the head. More tangleweb, and they dragged Mario to be with Vanessa, both getting blindfolded and locked into a stateroom with Quentin, mostly recovered, standing guard.  Returning to the bridge, Travis, having previously checking the security cameras (which were broken) checked the audio.  They heard noises in the second drive pod.  Deciding they needed to rescue the remaining crew, they started traversing back through the ship.  A quick check up the stalk to see if anyone was in the ship's pinnace, and they were outside the drive pod.  The lower deck was empty.  Knowing there was another crew member, the navigator on the upper deck, Travis climbed the ladder and gingerly opened the hatch.  A brief conversation, and the remaining crew member jumps down the hatch, missing Travis but landing a punch on Boris.  Franklin shoots the man with his stunner, but does not knock him out.  Another punch on Boris, and our good doctor is out for the count.  Another stun shot almost takes out the beserk navigator, who manages to take out Franklin who was still a bit dazed from the last encounter.  A good pipe to the rear of the head from Travis manages to finally get the crewman knocked out.

All four of the drugged crew were then locked up in the stateroom as our adventurers, bruised and battered, make contact with Trane below.
Posted by Craig Oliver at 12:46 PM No comments: