A day past the 40th anniversary we played the last round in my current game. The good doctor Boris is doing a larger loop around the Trojan Reach before returning (possibly) to Glisten, and our young Scout, accompanied by Li as his engineer, is returning to Cyan to get his ship fixed as well as report on what happened.

I pretty much soft pedaled the adventure - originally I was thinking the Katydid would not be able to even launch, thus fixing the issue with 2 players and having 2 ships. However, as things worked out with real life, the plan changed a bit.

The Katydid was downed by an EMP, creating an impact crater on Selshor. The planet having a very thin atmosphere meant that the ship was almost safe from the local TL 6 governments. Between the high altitude requiring extensive equipment to live, and an almost impervious crystaliron hull, the ship, while scuffed and marked with repeated attempts to enter, was still safe and sound.

The first trip was a scouting trip to see how bad things were.  Using a probe to create ECM, the ship's pinnace landed nearby and Travis, Francine and Ferdinando got into the ship. They had a few minutes before the local government forces arrived from their base camp a couple of kilometers away.  They managed to get the ships logs and do a quick engineering survey and found that the ship was damaged but that they could probably repair it.

Another day in orbit, and Travis, Ferdinando and Boris return to the ship. They get enough fuel to get the Katydid to orbit, and start on the repairs. The local goons show up, waving submachine guns, but they are unable to get in or do any damage to the ship. Additionally, the local forces only have a couple of hours of air before having to return to the base camp.

It takes another full day to repair the Katydid enough to get her into orbit, along with the daily display of impotent machismo from the local government. Finally everything is as ready as they can make it. Travis starts up the engines, and they sputter. Assuming a fusion plant can  sputter....In the meantime, Le Suroit mentions that another crawler has just reached the plateau, hauling what appears to be a howitzer of some sort. As the terrain is unforgiving, and the crawlers are slow, they do have some time. Which they needed - it was the third attempt that finally got the Katydid launched, and moments later they matched high orbits with Le Suroit.

A few days of additional repairs, and the two ships parted ways, and we pretty much finished the mini campaign. 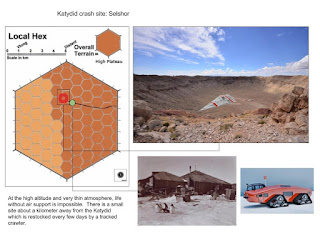 Posted by Craig Oliver at 8:40 AM No comments:

The upcoming Traveller Sunday may be the last - one of my players is dropping out.  Hopefully due to other things in real life versus just not enjoying the game.  Sometimes it is hard to tell.

The Selshor system is a red zone system. The primary reason, outside of being outside the Imperium, is the rabidly xenophobic residents. Yes, another xenophobic planet, but at least this one is not a dictatorship - it is a balkanized world (well, one of the governments could be a dictatorship).

It is a small planet with deep crevasses where the population lives in one of 3 major or a few of the smaller valleys where the air is merely thin versus very thin. Most of the planet is high plateaus, which is where the Katydid, Travis' Scout ship, crashed down.  The reasons are not yet known as to why the ship crashed, and the Scout that managed to escape, one of the scientists aboard Le Suroit, has only hazy recollections other than an almost dire fear of the planet itself.

During the week in jump, between research on Girly Girl the Lord Fish and trying to study up on astrogation, the Travellers learn what they can about Selshor.  Beyond the physical information on the system (11 planets and a planetoid belt, 3 gas giants) not much is known about the actual population. The last ISS survey as 11 years ago and apparently they did not get too close to the population at the time. It is estimated that there are about 800-900,000 people, all human, split into 3 major population centers in 3 different canyons that support human life.  The planet is a desert planet with no surface water, although there must be underground water for the nearly 1 million residents. 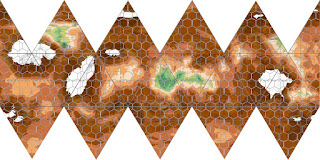 Posted by Craig Oliver at 9:43 AM No comments:

We sped through a couple of planets: Candia was a desert planet ruled by yet another dictator. Le Suroit stopped by the gas giant, made a few wilderness runs with Travis learning to fly the pinnace, the regular maintenance by the engineers, a very successful research roll, then on to the next system. T'yana is a rich garden world.  Travis and Li restocked with fresh produce as well as frozen and packaged supplies while the pinnace made a few trips reloading fuel and cargo.  There was yet another very successful research roll, so Dr. Boris is making headway on the Lord Fish issue.

This is where they left off: our next session we'll see how well Travis does on his astrogation, how well the doctor and scientist manage to continue their research on Girly Girl (the name of the Lord Fish, who is in a huge tank in the main lab).

Selshor is where the Katydid crashed more than 6 months ago, getting on to a year now.  Selshor is outside the Imperium, so while the physical status are well known, the politics and society are not as well known.  Dr. Francine Occa, who was a crew member of the Katydid and managed to escape, only knows that the population is even more xenophobic than Cyan's ruling class, and that the ship crashed on a high plateau with extremely thin air. Her rescue was quite fortunate - Selshor does not get many passing ships.  She recommends extreme caution in their approach. 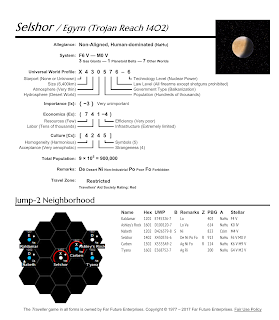 Posted by Craig Oliver at 8:31 AM No comments: