I've got 1 brave soul attempting to load the Traveller Tracker software. So far it has not worked: basically a certificate error. I thought the HockeyApp process was supposed to do all that, and it did create a certificate when I prepped the program for distribution.

I did manage to install it on my tablet.  The download is a zip file, and you unzip that. There is a .ps file (powershell) that you need to right-click and say run. It should prompt you I think, then it goes & installs the program. At least that was my experience. As we all know, it always works on the developers machine! You may have to run the powershell as an admin, but I do not recall doing that when I installed it on my test machine.

One thing I just found: you may have to delete the old app and try again:

I may entirely forgo the UWP version, and start yet again with just a plain Win32. I would keep 90% of what I did (and clean things up hopefully) but my goal was to actually get an app into the App store.  But if no one else can test it (and it has a lot of issues still, and more that I won't find simply because of my built-in bias on how to run it) it may end up not going there.

And sadly despite having a 3 day weekend I did nothing fun: it was worrying and trying to do homework all weekend. I have some sincere thoughts about dropping out. To quote Roger Murtaugh, I'm getting too old for this...
Posted by Craig Oliver at 8:38 AM No comments:

I went ahead with the Campaign Cartographer Bundle of Holding. And got the Cosmographer add-on which in theory lets me do Traveller-like maps.  Most of the maps it turns out I could do with GIMP and stuff, but I'm just learning. The Traveller star maps are also probably easier in GIMP, and the documentation says that you can only import official Traveller sectors for the subsector mapping, which I've not dug into.

But...it does have a lot of nice templates which will save a lot of time, and there are a LOT of features I need to get under my belt.  So I think it may be worth the cost, just with a pretty big learning curve.

But I did make a play map in a fantasy style. I'll have to play with the SF styles.

I'll also see if a PDF attaches to these posts... 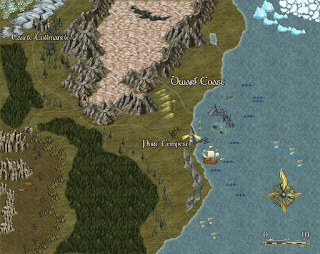 
Posted by Craig Oliver at 6:55 PM No comments:

There is a somewhat active discussion over on COTI about the T5 rules.  And I may be misinterpreting something. I thought that spec trade was handled outside of bulk cargo: bulk cargo is what is sitting on the docks, so to speak, and someone is willing to pay the Cr1000/ton to ship.  You have the major, minor & incidental lots, basically sealed containers. Really there to fill up the remaining few dTons of storage if you want a full cargo hold, or can't wait for the weekly roll on the spec trade.

Spec trade was rolled weekly for what it was and the tonnage, at least in the earlier editions. Still doing that - the software in theory adds a week every time you do a search for cargo and passengers (this is configurable by version but defaults to a week). So each time you click that button, I go through all the systems within jump of your ship, generate the passengers and three levels of bulk freight for each system, then generate a random speculative cargo. It is that last cargo I cannot find the tonnage for, UNLESS we use the freight guide which is:

Almost there. The rules only cover the purchase price, not dTons or anything like that.  Currently I am defaulting to 1/25 of the cost for the tonnage, and yo can now purchase speculative trade items. The other major difference is that the is no haggling over the purchase price, just the selling price (i.e., the actual value table is only for selling items).  So that was also an interesting twist. So when you purchase a spec trade in T5, it just subtracts from your credits and cargo hold.

I still need to pass in the cargo code, and need to come up with a better way of generating what it is you are buying from the list of cargos. And I want to make the tonnage adjustable by the user which should be easy enough. I now see a better way possibly of integrating the Classic with T5, but that's okay. The code has gotten a lot messier than I like, but apparently that's how I code.

I did add a flag to the version table: CanAlterPurchasePrice. This way we can turn that on/off it you want to be able to haggle.

But some progress was made at least.

I am really itching to play or referee again. I was talking with a guy at the gym who may be interested, and I know John would play again, either as his previous Scout character or we can roll up a new one.  I may do the each player rolls up 2 characters so we have enough for a ship crew, depending on how many players play.  And I've gotten in touch with the guys I used to play Traveller back in college, almost 35 years ago.  Maybe a Roll20 version would work out.
Posted by Craig Oliver at 5:27 PM No comments: