Turns out our Monday game got cancelled and moved to tonight. So, lacking time, I am going to borrow a character/NPC from the Fantasy City Scenes III book I just got in the mail. Yes, another Kickstarter I backed a while ago, and will use this just as a quick & easy. And oddly I used his house for the Sheriff's house and office. Guess I liked it. And as much as I like this type of book, as it can help spark ideas as well as give you an NPC or character, I always feel sort of guilty not doing it all on my own. Which is ridiculous as that is why I buy these things: to get me out of the same old characters I may come up with!

I'll just copy a bit of the text:

In his younger days, Timothy Dixon was an adventurer, a dungeoneer who spent months at a time exploring the many ruins, dungeons, and strange places of the lands. Trained as a fighter, Dixon thought that he enjoyed his life on the road, until one day when wounds suffered in battle with a terrible eye beast forced him to rest and recover at the home of a villager. Weeks of working in the gardens as he healed changed the man’s outlook on life. Once he was fully recovered, Dixon sold many of his be-longings – mostly gear used in adventuring – and rented a large home in the city. It has now been three years since Dixon last used a weapon in battle, these days devoting his energy to caring for the small vegetable garden that he maintains in the city. To make extra coin, Dixon rents rooms in his large home to heroes who prefer the quiet of a private house to the noise of an inn. From time to time, those Dixon knew during his days as an adventurer will pass through the city and spend a week or so with the man, talking about the old days and, at times, trying to convince him to join them on some excursion or other. Dixon has no interest in returning to a life on the road and has been slowly saving his coins in the hopes of buying the home that he currently rents. Perhaps one last adventure would earn him enough gold to meet his goal? 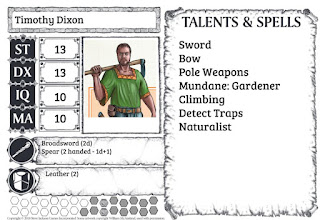 He did hold on to his old sword and leathers and can always get a spear from the town somewhere should he be convinced to go adventuring.

He goes by the Nimble Priest Inn once in a while, and if a bit flush with gold perhaps the Devilish Waters. He sells some of his vegetables in the market once in a while, using an old hand cart to transport his produce.