Going with another Traveller character. Initial stats rolls B7A392. And an odd roll for a male, and a 2 for human. A big brute of a man from way down in society's ladder. And none too bright. He looks to be the perfect thug! The Outlaw book from Clement Sector has a wide variety of criminal types: cleaner, driver, drug dealer, forger, hit man, smuggler and prisoner. Though prisoner is only if you get caught! And the best chance of his actually surviving is the drug dealer career.

And in the end, this would not be a character I'd want to play - it ended up pretty depressing. But it is an NPC with a very rich background that could somehow come out if a character was feeling charitable.

Clement Sector's character generation starts actually in childhood, so perhaps we'll see the path that led our thug to a life of crime.

First, I'll use the 3rd version of the book I just got for this part of things (the Outlaw book uses an earlier edition so has more random rolls). He comes from a low gravity world and picks up Survival (Low Gravity-1, Low Pressure-1) and Vacc Suit-0. Some small, nearly airless world then (It was Dade of the Dade subsector for those who play in the Clement Sector). His primary language is the Imperial standard Galanglic.

Youth Events: Somewhere between 4 and 8: Our family suffers a severe financial loss. Lose even more social! B7A391. Yes, this does appear to be a dismal start! Between 9-12 years old, my life was calm and peaceful. Living in an alley may seem calm... Then disaster: as a teenager, my parents are killed in a serious accident! I lose even more social and even my education is dropped. B7A381 (social can't go below 1? not entirely sure). Somehow, though, at the orphanage I apparently take some time to study with what feeble mind I do have and pick up Science (Chemistry 0). Yes, we all see where this is going.

Leaving the orphanage behind, our drug dealer picks up an eclectic set of skills after barely surviving with an 8 (+1 due to his endurance): Broker-0, Carouse-0, Gun Combat (Pistol-0), Persuade-0 and Recon-0. Somehow, he meets some extremely wealthy customers, and picks up 2 contacts (and one will have to be at the station now). He fails any sort of promotion.

He just fails the survival, and the mishap roll of 8 means he has been using his own product. I am now addicted to Artekefamantine, also known as green eye as it turns the whites of your eyes green. Lose 3 benefit rolls (meaning no benefits) and join the vagabond career.

I can either be destitute or a transient. 50/50 and rolling a 3 (1-3, 4-6) he is destitute. And fails that roll: he was on a harsh planet and almost freezes. Loses an endurance point: B79381. He is falling apart as we watch. He does pick up Navigation-1 (this is the land navigation vs the classic Navigation which is now Astrogation) so apparently, he managed to get his way out of the cold before dying.
And before too much more happens to this poor soul, we'll leave him huddled in a little used cargo bay at our high port. How he got there is a good question.

Navigation-1, Survival (Low Gravity-1, Low Pressure-1), Vacc Suit-0, Science (Chemistry-0), Broker-0, Carouse-0, Gun (Pistol-0), Persuade-0, Recon-0
2 contacts
Arlo was raised on a small world and had little in the way of a life. When he was 9, his family lost their stake in the mines they were working in. The next few years were a calm before the storm as they lived in government housing, barely subsiding, but at least together as a family. Sadly, both parents were killed in a pressure loss accident when Arlo was 13 and living in the orphanage was yet another blow to his development. He did get an interest in chemistry, and this started his path to drugs.
On the streets at 18, Arlo started selling drugs for the local gang. While picking up some of the basic skills to survive, he started using. Once that started, the gang would no longer help, and with his green eyes, he left is home world, working on tramp traders just to get away. Unfortunately, the very first port of call was a cold planet, and while he understood how to survive on small planets, he almost froze to death here. Somehow, he managed to get aboard a container headed for the high port and has been living in the cargo bays ever since.
You may meet Arlo begging or passed out. His ragged clothes do little to hide his huge frame. His speech shows the lack of an education, and he has a hard time grasping anything complex. He has hired himself out as muscle but lacking any actual fighting ability relies on his 6'3" 250-pound frame to frighten people. 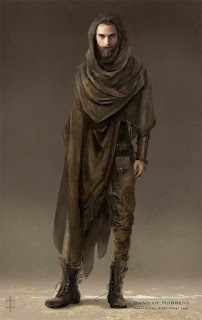