Goblins in TFT are not always cannon fodder - every game I've run the last few years it seems someone plays a Goblin wizard. As Zesp is one of the merchants in Windemere, and I've a feeling that our current Goblin Wizard may prefer dealing with a Goblin merchant, I present Zesp Zrag, proud owner and operator of the Zrag's Mercantile.

See this initial post for how TFT deals with Goblins, as well as a bit of information about the Zrag clan. And I may pull some characteristics and ideas from this Gobsmack KS I backed. This is a fun book and gives a lot more depth to playing a Goblin, or at least more of a backstory for the entire race if you want.

Goblins start at ST 6, DX 8 and IQ 10 with 8 points. Zesp has been around, and as a member of the Zrag Goblin clan, has picked up a thing or two. So, he'll be more of a 38-point character. And Goblins have some innate magic, so he will have a spell or two. 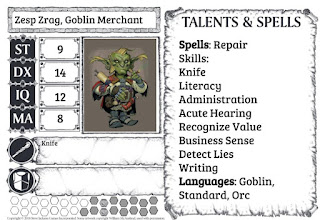 ST: 9    DX: 14    IQ: 12
Spells: Repair
Skills: Knife, Literacy, Administration, Acute Hearing, Recognize Value, Business Sense, Detect Lies, Writing
Languages: Goblin, Standard, Orc
While an average sized Goblin, Zesp comes across louder than life and seems to take up more space than his diminutive size would indicate. It may be the constant cloud of smoke from his beloved cigars: there is one constantly lit nearby. His rambunctious personality is tempered by the cigar and his nose-picking. He dresses quite fancifully, even his shoes are quite ornate. His is quite proud of his sartorial skills. He is the owner of Zrag's Mercantile, a decent store that will have a variety of items available. Zesp keeps well-stocked due to the constant influx of caravans, where he invariably seems to have some package or another coming in. With his sharp hearing (some would say it was magical, he seems to hear rumors before they start, and whispering in his store will avail you not the privacy you may expect!) He has a keen business sense as well as a keen eye for value: his word can be trusted. As many adventurers come through his shop, often with loot to be sold or at least evaluated, he keeps his word to keep his business going. For a gold piece, he'll tell you how much he would purchase your item for. For four gold pieces, he'll tell you what it is really worth. Most Goblins would be aware of this standard, most random adventurers do not.
Because of his dealings with adventurers, he does buy and sell magical items. Strange coins and the like and he'll direct you to the town money smith, who can exchange strange coins and gems for local currency. For a small fee of course. He will have a +2 reaction to any Goblins by themselves, or a +1 if they are a member of the party, when adventurers come calling. There is a 66% chance he will have what they need (1-4 on a d6), and if not, it will be available in 2d6 days. Ordering something special is available but will take 2d6 weeks. Costs are as per the book, and all items are of regular quality. There is a 1/6 chance of magical items available due to other adventurers trading. Zesp is a strong bargainer though and loves to haggle. If you can survive the smoke and ignore the nose picking, you may be able to talk him down a bit simply because he enjoys the back and forth.
Zesp also offers repair services. While quite facile with his hands, and some of his assistants are even better than he is, for some things he relies on his magic to repair things if there is a rush, or it is beyond anyone's capabilities.

Zesp tolerates Rennor's wandering through but does keep an eye on her and her family. While not outright rude, he does behave sometimes a bit cruelly towards the young Orc.

Unknown to any outside the Zrag clan, he has some magical parchment with a permanent write spell on it. Travlling Zrag merchants can keep in touch, and let others know who may be coming into town, who may need what, and so on. Sometimes adventurers will meet a wandering Goblin merchant who seems to know what they need, and if so, it is probably one of the Zrag clan.

The store itself is a two-story affair, with an upper open balcony where some of the more rare and expensive goods are displayed. A cellar with a double-door below the store carries stores and goods that are not on display. A small dumbwaiter was installed when Zesp opened the store, and one of his assistants will use that to move items from the cellar to the main floor. Broad wooden planks, well-worn and scuffed, hold shelves and racks full of equipment. Behind the main sales desk are barrels of wines, flours and things that may smell a bit off. He carries a wide variety of cigars kept in a glassed-in cabinet behind his normal perch. Caravans from all over seem to bring him cigars. There are usually a couple of Goblin workers besides Zesp at the store, and at night there is Flaph Greenguts as a night watchman. Known for getting his gut sliced open and starting to get gangrene, he survived with a healing draught from Eriznock Longbraids, a desert Druid who lives a couple days north of Windemere in the Kalore Desert.

Zesp lives in the southern side of the town known as the Goblins Drecks. While the name is mean, the Goblins just accept it as is. There are almost a dozen Goblins in the small trade town, half who work for Zesp, the others doing menial jobs about the town that no one else wants to do.

Zesp is my hero. He and I should create a mercenary merchant company. Profit, through privateers or baking, yeah its a thing!

Can do. He has some gold for investment. 70/30 split on the profits.