Another long day and out of time. So, I have a choice: true Classic Traveller or TFT? Those are the fastest I can use to generate characters. And while I did do a Delve character, I really should look into some other games I have. In fact, I plan on running Apex in the Old West sometime so we can have a Dinosaur Cowboy game. I'll try & do that this weekend. Maybe a western-style map as well!

Anyway, let's just roll dice & see what we get. If it is good or interesting, CT, else TFT.

698657 - well, sort of interesting. And the only career that gives her a good chance is the Army. And maybe she will be my first character death this year. And she easily gets in.

She handily survives and gets a commission, and (re-read the rules) she also made her promotion. From raw private to Lieutenant to Captain in her first term! Due to the 1st term, commission and promotion, 4 skill rolls! She does not have access to the advanced education roll with her 5 level of education. We'll just rotate through the tables.

Noted that the air/raft skill is later renamed to grav as the description does indicate all grav-based vehicles. Sadly, she does not have enough strength for a modifier. Maybe one of those rolls will boost her strength.

Re-enlistment roll was a success.

She again survives and made promotion to Major.

hah - I don't remember seeing grav-belt as a specific vehicle. I assume it later got subsumed into grav vehicles in general, but I had a character, a Marine, who used power armor with the built-in grav belt. Good times!

And she failed her re-enlistment! With her rank and 2 terms, she gets 4 rolls. 2 cash, 2 benefits.

Air/Raft-1, Grav-Belt-1, Blade-1, Revolver-1, Cr10,000, Mid-passage ticket
A brief but amazingly rapid career in the army left Major Quarol Rocha spinning in her own head. She joined the army fresh out of high school and rose very rapidly through the ranks. Some say perhaps too rapidly and that is why she was denied re-enlistment. She was a capable officer and well-liked by those she commanded. She took great joy in flying: grav vehicles or her preferred style of grav-belt. There was a certain freedom in the air.
After 8 hectic years in the Army, she decided a nice long vacation to figure out her next steps. She ended at the high port at the end of her term and took on a long-term apartment while she weighed her options. She spends a good bit of time at the Purple Fountain, mostly because the photonic light sculpture in the concourse next to it caught her eye. In fact, she has talked with its creator, Sterey Pera, when he noticed her looking at his masterpiece. They've since taken on an almost father-daughter relationship. She keeps her service revolver at her apartment, well-cleaned and serviced. Eventually she will have to find a job as her credits will dwindle down as she stays at the port. 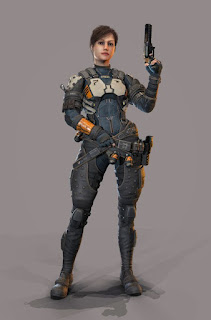 And finally, the Traveller Army career has always been interesting to me. Like all the LBB1 careers, they predate the OTU. There is no 3rd Imperium, so the careers only say things like "members of the armed planetary forces". Which I like in many ways: the "proto-Traveller" does not have the decades of history and our Major Rocha could be from some small planet's army, or some interstellar government's army that has armies on multiple worlds. It was up to the referee to decide what and how they wanted to play.  Probably why I keep going back to Classic Traveller (and the reference in the name of this blog!). It was my first RPG, and the original LBBs were open to playing any SF game we wanted to. Don't get me wrong: I love all the resources now available. People in the Traveller community are very giving when it comes things like the Traveller Map site, or COTI. But as my sig says for my COTI account, Traveller is a neat tool box!
Posted by Craig Oliver at 8:08 PM