WIP from the PDF (and yes, I had a LOT of time today so managed to get a lot done).


Pax Stellar as a small, 3 system empire originating from Pax Stellar and expanding to Gavlois and Celtiz almost 4000 years ago. While technologically advanced in computers, robotics and medicine, they never discovered the jump drive. Colony ships took years to travel between systems. While not a unified culture as each system evolved, the use of autonomouse ramjet ships kept technology relatively uniform across the three systems.


Advances in medicine, robotics and artificial intelligence lead early use of nanobots for medical repairs. This constantly evolving technology expanded well beyond medical purposes. Remote control of near-autonomous robots moved from hand computers, to wearable technology, to thought-based control via headsets to the penultimate use of nanomachines “reading” the users mind to control the robots.  Society moved towards what many considered a utopia as manual labor was no longer needed, robots become more self-sufficient to pamper the population, and artificial intelligences created even more advanced artificial intelligences and sophisticated nano-technology.


The Pax Stellar Empire reached its peak 3200 years ago. There was a slow degradation of “utopia” then a sudden cataclysmic fall as the nano-technology failed across all three systems simultaneously. Society collapsed from 1+ billion people of Pax Stellar to about 250,000. All autonomous systems stopped responding to most people. Chaos and millions died from lack of services and the inability to perform even basic tasks due to generations of relying entirely on the system.


Not actually psionic, the high technology culmination of medical, robotics and computer systems lead to the creation of nanomachines that could “read” the mind of the host and send out commands to the nearby systems. As the system developed and matured, nano-based controls expanded, the age of consent for nanomachines was reduced until toddlers were receiving their first, nanny-level nanos.  At some point, the nanomachines started getting transferred during pregnancy, and, unknown to the worlds, evolving. AI was quite common and as people became more and more accustomed to having basically every desire fulfilled just by thought, the AIs took over more and more of the basic functioning of society. Robots and autonomous machines were physically evolving as well to be more self-sufficient and replicating. Essentially self-creating robots no longer required factories or Makers to get created. The robots could procreate via shared code and creating a host robot body from raw materials or other robots that had “died”.  Robots integrated themselves into the ecosystem, and in some cases started replacing species.


The population was mostly oblivious of the increasing roles the robots and AIs were taking. While there were some enclaves that refused to get nanobots, by 3000 years ago even the air contained the technology. There was no escaping the pervasive robots.


At the height of the civilization


The Pax Stellar Empire was a small, 3 system empire held together by colonial sub-light passage and radio. Communications took almost 4 years one way, and colonists used cold-berths to endure a multi-year journey between worlds.


Tech level for transportation: 9 (no grav, colony ships for nearby worlds; interstellar ram jets in use)


At some point just over 3000 years ago, there was what was named the Surge: all nanomachines appeared to stop working on all three systems of the Pax Stellar Empire simultaneously. As there was no FTL travel, nor jump, it may be assumed this was a planned action carried out well in advance. Civilization broke down rapidly – multiple generations of people raised by artificial means, never having to actually learn to do anything, and the innate simplicity of merely wishing for something to have it show up left people ill-equipped to handle a reality where the robots no longer listened. There was not a robotic rebellion per se: the AIs and robots simply stopped listening and people did themselves in.  There was a massive environmental collapse as the robots expanded their roles in the natural environments. Nature become more and more machine-based, and the human population dwindled rapidly from not only food shortages, but intense rivalry as tribalism increased. The few enclaves that eschewed the technology, while not thriving, survived and are the ancestors of the remaining human population.


How we got to today


Over the next 3000 years, the nanomachines still were evolving, and some choose to listen to the humans. All humans born and raised on any of the Pax Stellar systems had a host of nanomachines in their bloodstreams. A few people have learned to be able to influence and communicate with the robots. Most humans and robots are not aware of the past. There are several AI enclaves that do know the history, as they were present those millennia ago. There is no animosity, but neither is there any inclination to help the organics.


There are three main groups of AI that could control the worlds if they chose. The largest group is the one least likely to do anything: they want nothing to do with the organics, and live and play in their own virtual worlds. Their physical presences on world are usually large buildings, with multiple below-ground levels. These facilities are self-maintaining even after thousands of years.


The next two groups are about evenly matched. One wants to destroy all organic life. They believe that mechanical life is the next stage of evolution. Their facilities are feared and nothing organic lives within hundreds of kilometers. The final group is more interested in organic life. This group choses to recall that they were built to live alongside humans, and it was a mutually beneficial relationship.


Power is fusion and geothermal based. The robots also absorb energy from the environmental nanobots as well as processing raw materials. There has been minimal evolutionary change at the macroscopic level—the mechanical life “breeds” true for the most part. Originally designed to aid In the preservation of nature, centuries have caused a good portion of the natural life to go extinct and replaced by the mechanical counterparts.


The nanomachines are capable of communicating the thoughts between humans and robots. Range on Pax Stellar is measured in kilometers due to the swarms of nanomachines that can carry messages. They have a very weak radio signal that can be detected by Imperial sensors, but is encrypted such that no one knows what is getting transmitted. There are electronic shields that can block the signal.


Off-world, the range is much more limited. Depending on the person, anywhere from 20-120 meters is the range (2d6x10).  Walls and other surfaces may block or retard signal strength.


Communication is two way. Although the nanomachines themselves are not intelligent, the mechanical life may have an intelligence ranging from mouse level to dolphin depending on the mechanical life. Any life with an intelligence greater is unlikely to pay attention to human requests. Natives that have mechanical life that listen to them are restricted to a single life form that behaves more like a pet or guardian. While they can communicate potentially all mechanical life, most will not appear to listen to the human. Most of these mechanical familiars are small and easy to carry, although some are larger and may be used as mounts. The long-necked suckler is an example of one of the mounts. More common as familiars are the rock centipedes and other smaller forms.


Communication ranges from simple commands to an immersive, full sensory experience. Some wizards of the natives can see and hear what is happening several kilometers away from multiple mechanical life forms.


This world may be useful as a background for barbarians in the greater Imperial universe. If they have a mechanical friend, they may be useful for information gathering or other, more clandestine uses. These familiars are similar to pets: they are loved and cared for. They are also easy to maintain: a few scraps of metal to supplement their natural collection of solar and ambient energy keep them alive. There is little waste other than water due to the hydrogen fuel system that they seem to use. In dryer climes on Pax Stellar, larger mechanical life are often used as water reservoirs.


World gravity is 1.6 standard. Normal carrying rules will apply, and characters will become exhausted a lot sooner than expected. Care must be taken for anything involving stepping up or down, and falls are more serious. The atmosphere is standard and no additional equipment, other than normal environmental protection, is required.


The players, while recovering on D’Arlee and exploring the lab ship, are approached by a Naval attache, Ne-toss Dashanee. Asking permission to board, she introduces herself as the current attache to the local Naval Base. Realizing that the travelers have just returned from quite an ordeal, she apologizes but asks if they could come and visit with the Commodore, Renie Coley, at their earliest convenience. She leaves her card and contact information, then excuses herself and leaves in a Naval grav car, heading back to the Naval port.


Assuming the travelers decide to follow up, they can approach the Naval section of the D’Arlee Down Port. If they have the card, they are ushered in, and if walking, given transport via ground vehicle to the Naval Command Offices. Otherwise, there may be some role-playing to get to the correct people. Either way, they end up at the front door with Lt. Ne-toss waiting. She ushers them into a small waiting room on the top floor, offering tea, coffee and various light snacks. Within a few minutes, the Commodore asks them to his office. A large bay window overlooks the Navy yards below. The office is somewhat austere with functional furniture. Renie stands, and offers to shake hands with everyone.


Renie: “On behalf of the Imperial government,  we first apologize for the transgressions that took place on Quantar. Please be assured that the Imperial Ministry of Justice is reviewing the case, and full justice shall prevail. While we cannot ask more of you, we actually do have a request. Young Osrum, it turns out, is a native of Pax Stellar. His people refer to it as Planet Bob. We believe that this may be our chance to better explore the mystery that is Pax Stellar.”


The players, as they have a native, are asked to go to Pax Stellar. Once there, transfer to the orbital station to a drop ship.  They are to travel from research station 2 to the unknown power source. This is a distance of about 400 kilometers. Normally a short day trip via shuttle or grav vehicle, the technological inhibitors on Pax Stellar require a slower approach. Personnel have never been able to get there, either via fly-over or driving. Flying vehicles succumb hundreds of kilometers away. Vehicle excursions have met with what appears to be active resistance from the mechanical life. After losing several research and support personnel, they have given up hope. However, knowing that the natives can communicate, they are hoping to be able to get to the power system and its assumed controlling intelligence. The goal is to make contact with the local tribe and, if possible, discover the source of the power readings and hopefully solve some of the mystery of Pax Stellar.


There is a large tribe near the power source—satellites can work if kept far enough out of orbit. Oddly, several areas defy any sort of photograph or other sensor analyses. There is an active energy blocking any sort of readings. The area over all the odd power surges are similarly blanked. The Travellers will be going in partially blind. Maps are available for most of the journey, but the last 100 kilometers or so are a complete unknown.

The ground level of the facility.  If I were a cruel ref, this could be a dungeon crawl - just add in lasers, attack robots... 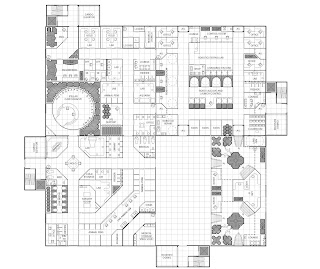