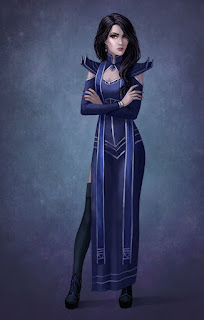 Over-compensating for her perceived lack of a good education, Lady Bethany spends a large amount of her time at various archeological sites on Iomaria. Her income of Cr20,000/year from her lands on her home planet (a high population sub-sector capital world) barely covers her expenses quite often, but she has learned a great deal about the natives of Iomaria as well as the people who live on this heavy planet. She is often seen in various cities and ports across the world, though the Imperium does maintain a relatively modest office suite at the starport.

Really, I suppose it should be part 6a, 6b and 6c as my original plan was all 3 nobles were going to be on a single post. Then it just took longer than expected to go through the process. And here it is for the final noble, and this time it took me 20+ rolls before one came up a knight! Good think I like rolling dice!

We start with 68674B. While Lady Bethany is fairly average for the most part, her education is sorely lacking! Because of that, I am actually going to see about getting her education increased. Assuming I can figure out the education system: it was complicated and as her intelligence and education are not great, she may have to do a few waivers to get through.

And yes, in game terms, it really does not make a lot of difference about the education stat. I use it in games for book knowledge about things, and sometimes as a modifier for performing tasks that you may not have a direct skill in. It is one of those, to me at least, hard to pin down the best way to use it. But it is just drilled in me that higher education is important! Of course, I am not exactly using my master's in liberal arts, but I took that for fun more than anything else. And my computer science degree is 40-year-old now, so while a lot of what I learned is actually still applicable, more important is what I am doing and learning now.

Side note: the Delve game actually has the skill rolls all tied to one of your stats, which are percentage-based. If your learning stat was at 40%, for instance, any learning skills are rolled at that percentage. Each of the couple dozen or so listed skills are associated with one of the stats. Makes it pretty easy once you figure that out (and then there are levels as to just how well you know that particular skill, so may get a higher roll).

Having an education of 4, the only choice initially is to get ED5. Rolling a 7, which is her intelligence, she just makes it so we now have 68675B. She can now go to college. Int or Edu stats is really going to assume she gets a few waivers. However - that being social or less she will ALWAYS get a waiver if I am reading those rules correctly. It is good to be a high-ranking member of society!

Year 1, she passes! A couple of rolls and she is majoring in Archeology, so Archeology-1.

Now at age 22, sh eis ready for the world of the nobles. And really hoping she does not get elevated as she is already a knight. I figure as soon as she is exiled, she will be on Iomaria.

And of course, year 1 as a noble she is exiled. I think I'll let her stay a bit longer in the career as at this point she only has 1 skill, and while she is a NPC, that does seem a bit lacking! Rolling on the political column, she does pick up Diplomacy-1, so at least she can perform in her post!

Year 2, and she is still in exile. She picks up Leader-1, so despite herself, she seems a born leader.

Year 3, and still in exile, she takes to the legal system and gains Advocacy-1.

Year 4 and she returns from exile! She succeeds in the intrigue's or Horen's Palace, and rolling on the personal (I know, risking an actual social push! but hoping for a physical stat) she gets +1 intelligence. Her UPP is now 68688B.

Deciding to stick in this career, she makes another intrigue, the Gald Scandal (why yes, that is the neighboring world! There may well be political intrigue on Iomaria between our nobles). She is not elevated, she has apparently spent a LOT of time in her exile studying Iomaria, gaining World Knowledge-6 Iomaria which is a pretty impressive feat.

Year 2 she is exiled back to Iomaria, and this is where we pick up her story for the system.

And it turns out I am going to have to deal with the NIL, native intelligent life. A heavy world with a dense, tainted atmosphere. I am going to have to re-read that JTAS article on world building as it had some notes on native intelligent life. Plus, there are (of course!) rules for other sophonts. Next post - native life forms! And that may include my still unedited post on random tables to extend the animal encounter tables (and yes, as prompted I do now have Stars Without Number so will review those tables. Maybe just use them as at times it seems my imagination just stops cold!)

With that level of world knowledge, she is by far the local expert on the place. I want to apply the Marcus Brody (false) description to her.

She's got a two day head start on you, which is more than she needs. Quatori's got friends in every town and village from here to the pole, she speaks a dozen languages, knows every local custom, she'll blend in, disappear, you'll never see her again.

Well, technically from the T5 perspective, she does not speak a dozen languages, but yes, she is the foremost export on Iomaria: if she does not know it, she knows where to find it.

Did not really think about her flitting about all over even though I distinctly did type it down! but yep, she goes all over, even to the dark side (there are some good cookies over there!)