Back in part 1, Iomaria ended up having NIL, a native intelligent life. I've not read this section of T5, so here goes.

First, there are various definitions of life on a planet. Corporate, colonists, transients, settlers, transplants, natives, exotic natives, extinct natives, catastrophic extinct natives and vanished transplants. Because of Iomaria's dense tainted atmosphere (9), we have exotic natives. And oops - there are some inconsistencies here: the initial definition says 9+, but later it is A+, and there is another chart in the actual workflow that also says ABC. So, our natives are no longer exotic. I even added a comment over on COTI for that.

Next, we identify the sophont and note that it is nothing more than a random word and attach to the planet or system. Using this SF random word generator I pick the Liobbe of Iomaria (Iomaria 2 Vee [K3 V]). The Vee is due to Iomaria being in a far orbit around its big planet Tusog.

Next, we find the environment. Having a -5 - +5 range, assuming a flux roll. A 2 gives us wetlands - water-dominated marshes. And moving to chart B it does say that, though the A chart does not. Rolling another die and our wetland dweller is a walker. As such, our NIL walks and breathes the dense, tainted atmosphere. And I am not sure I ever figured out what the taint actually is! Interestingly, had I rolled a -1, 0 or 1, as Iomaria is tidally locked, they could have been in the baked lands, twilight zone or frozen lands. Though as Iomaria is tidally locked around a planet and not a star, it won't be as extreme as if it were tidally locked around a star.

Another flux roll, and a -3 is an herbivore. The type of niche is another flux roll, adding our native terrain roll to that. A flux roll of (5-1) 4 + 2 gives us 6, a filtering herbivore. And in the wetlands...may have some major mosquito swarms in those wetlands! Well, they could also filter the water similar to the baleen whale. Though they are herbivores, so pollen perhaps? Something that has some major calories though.

Next, we move on the to the physical stats. C1 is always strength, and C4 is always intelligence. Flux for other stats, so we have C2 = dexterity, same as humans. C3 is vigor rather than endurance. C5 is instinct instead of education, and C6 is social status, same as humans.

Our 6 stats are rolled the exact same way as stock humans, though we have vigor rather than endurance, and instinct rather than education. Vigor is defined as short-term resistance to fatigue, and instinct is genetically determined. This also gives us the genetic profile of SDVIIS, for Strength/Dexterity/Vigor/Intelligence/Instinct/Social.

We skip the entire caste system as we have a human-type of social hierarchy. Moving on to sophont genders, Our flux gives us a FMN: female, male and a neuter. We can also see if there are gender-based differences for modifying the base roll. Reading the notes, apparently instinct can also vary but education or training does not. As we have 3 genders (and the back of the sophont card has this laid out, lets see what we get:

Our females a tad stronger on average but a lot less vigorous, and, like the males, suffer a -2 on the instinct rolls. The males are brutes - 3d6 for strength. As with the females, they get a -2 on their instinct roll. Finally, the neuters are a lot weaker on average, less dexterous and vigorous. They make up for this by having regular instincts but a whopping +5 on their intelligence rolls. This can help me shape their society a bit, as the neuters are the ones behind most of the advances in the history of this sophont.

Gender is not determined until life stage 2. Apparently, our infants are all gender neutral. It is also fixed - once the gender has been determined, it will not change later in life. Going to make for some fun gender reveal parties as it will be a bit later in life!

Next, we need to determine the life stages (so we can tell how old they are when they have a gender). Atage 2 is teenage regardless, so that is interesting and would have a pretty heavy effect on society. Probably no need for Title IX types of things, as until they are teenagers everyone is the same.

Somewhere between 10 and 14, their gender is determined. Interestingly, most of their stages are similar to humans other than their senior stage which is 4 versus the 8 for human. They also have a shorter teenage period (which, if you are a parent, that can be a good thing! But as they also gain a gender, it is probably related to growing up fast once gender characteristics show up) They do make up for that though as their midlife is half again as long humans. This does give us a life expectancy of 70 years.

Moving on to the senses. This is going to be info I really have no idea how it will work in actual game play. Not that I am playing any Traveller lately, though hoping we'll get a game next year sometime.

Vision, our constant is 18 and visual. V-18-CRG. The 18 was a flux roll, and the ACR is based on the K3 star. Thinking I need to dig back into the vision section for what CRG means. A reference to where to find things would have been nice. Maybe T5.2. Anyway, finally found the bands on page 191, so C = Cerise, R = Red and G = Green. Basically, they see a bit higher in the visual range than humans do, having a harder time with blues. Not really sure how that would work out. And it turns out I just need to reference the senses chapter in book 1 to know what all these things mean.

Hearing is H-22-4132. This shows the frequency (4) is in the infrasonic range - humans may feel some rumbling but the Liobbe can hear well into the infrasonic range. We're going to need communicators to talk with them: they can barely hear the frequencies we speak at and we can't hear theirs. This is reinforced with the single span (the 1) meaning the Liobbe have a very limited range of frequencies they hear. Their voices oddly are centered a bit below their optimal hearing range. Meaning they speak in an even lower frequency range than they hear comfortably at. However, having a voice range of two they can make themselves heard. Again - this slight difference between speaking and hearing will have an impact on their society as well.

Smell is S-24-1. They have a horrible sense of smell. And in the section on smell, there is a universal odor profile! They have rules for determining if and what you can smell, and what you can determine from that. And even a random table to generate smells. Hmm, rolled up a royalty marker with an overtone of fear. I will have to use that to help determine how their societies evolved - there is some sense of royalty that rules via fear perhaps? Though the nuance of scatter implies it may be a run away signal. So far I have QEW as our scent. Adding in the remaining we have QEW-WB1. Meaning the females scatter and the males go beserk, and there is no effect for the neuter gender. Though I think I am misreading the table. Regardless, I like the idea of this and will try & work that in.

Touch is T-18-4. They are more sensitive to touch than humans (humans are 2, the Liobbe are 4). The sensitivity is used in rolls (as are are the sense values) but the immediate result is how many times they can try to touch something to feel something. Again - there are rules for touching things. I knew that T5 had the maker rules, but the sense rules are interesting if you really want a very crunchy game.

Same for perception - they are as oblivious as I am.

Now we move into body structure. I am rolling some boring flux, and we have a bilateral species. We have a brain in the head, but senses are torso-based. Not sure I am following the limbs table, but they seem to have arms and legs, and no tail or anything unusual. They have an internal skeleton but have gore rather than blood circulating under their skin. They have claws on their graspers (three or more mutually opposed flaps or digits). This gives us the fun code of H-TS-LN-AL-N for a head with a torso that has senses, legs and arms and no tails. I think that section needs a lot more explanation on what those codes actually mean as I am not sure if this means our Liobbe have two sets of legs and one is the arms with their manipulators or what. Like a lot of T5 - dense info-rich tables with an insufficient amount of explanation as to what it really means. You can tell Marc had in his head what he wanted to do, just did not always get it out on paper. I wish that Kickstarter had a professional editor involved (you cannot edit your own stuff. As mentioned way too many times, I write code and we have code reviews as we often don't see things if we've written it ourselves. Same for anything - you see what you want to see versus what is really there quite often).  But at least we have manipulators instead of hands, so that is interesting.

Special abilities! Our females get 2 rolls, and they gain special abilities in music and as a talent, rage. Which is odd as they run away more often from the earlier rolls. That shall be a challenge to integrate into this species. The males were to get 1 ability, then I rolled for disability, but the flux ended up with nothing.  The neuters were to get two abilities, but both rolls came up empty. Somehow the females ended up with all the gifts, the males and neuters, nada.

And just how big are the Liobbe? Based on the 3 physical stats, we have:

This puts the Liobbe into a "standard" size, similar to humans. The females and neuters are smaller than the males. Then there is the not-well-explained section to derive the height and all that. No indication on how to choose, so I think you can pick the type of body form profile. As this is a higher-grave planet, going with something a bit thicker than human. Very thick so our BFP (Body Form Profile) is 7. So for our typical Liobbe:
And hey - the next page does all that for you in a single table. I did not need to look up a cube root calculator!
Then there is a section on uniques, which I am not going to apply to the Liobbe. It is more of a suggested list of things.
Same for Psionics - I've never been a fan of psionics in Traveller (if I want to play that sort of game, I'd pick something different).  It does go into some fun decisions based on genders and all that, so it could be that only 1 of the three genders has the potential for psionics.
Whew! This is a lot more work than I would have thought! And this does not even include anything about their societies, how they interact with the Imperium and aliens on their planet, and even their population. 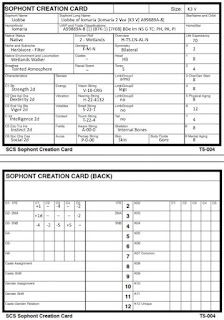