Scenery Pieces, Conan Game, and back to face to face?

As with a lot of my spending way too much time by myself, I've been trying to paint some of the Ramparts & Dungeons and Lasers scenery from the last couple of Kickstarters. The fantasy stuff is a lot easier to paint in many ways. I've been using cheap acrylic paint, about $1 / ounce. As this is the background and scenery, and takes a large amount of paint, it is a lot cheaper than using miniature paints. I save those for actual minis. Which sadly I need to get back to painting as I've quite a few in the "pile of shame" awaiting painting. But I figure I'll paint the ones I need for upcoming games for face to face...oh.

The game shop where we used to play will probably be opening up late July for those who have been vaccinated. I am one of those (though I would not mind Magento powers from the vaccine. And I thought my attachment to reality was a bit thin...but I could win a million dollars as NC is going to do a vaccine lottery. Think of all the paint then!) And my other group, the two boys have had their first vaccine, so hopefully we'll be able to get back face to face late July as well. Which is also when I am guessing my Reaper, Blacklist & Nord miniatures will all show up. On the same day. So hopefully in a few weeks, there will be some more be actual table top playing!

Part of the reason I like face to face is to share the dice rolls. There can be so much anticipation about that, at least for me. And as I usually have sucky rolls, I need to be able to role play a lot more to work around those rolls. And while my current group I assume is honest, there is one guy who always seems to get amazing rolls. Perhaps he is stealing all my good rolls... Anyway, I like to also watch the GM roll if they roll in front of the screen (or even have a screen). The dice mechanic is there to add some randomness to the game, else we'd just be doing improv theater. But often the mechanics of new games are easier to show than explain. And we're currently playing Conan, which is a pretty crunchy game. With a very dense character sheet. On the bright side, there is a really nice character generation site that goes through the process and gives you a form fillable PDF. We're doing something a bit different, and something I am really enjoying. We are actually doing some shared world building: we're playing various family members: we have the "children" who are late teens/early 20s. The twin girls Lifo and Lofa and their brother Skeld. I am playing their uncle Truble (yes, wherever I go there is trouble...). We had been on the run as our village had been over-run by frost giants and the Wolves. We were all that remained (and I had only just returned from my mercenary days for retirement. I am getting too old for this shit! And my shirt may be red...). We had a player who missed session 0, and in our first battle against the Picts, some kid (okay, again, late teens, early 20s?) comes running across the woods screaming Father as we we start our attack. And for a mercenary with apparent training, I really suck at hitting anything (see above note on die rolls). Which is okay, but there was some fun role playing after the battle as I had no idea about this new son of mine. Thorgrim tells me his mothers name was Gretchen, and I keep asking which Gretchen (and one of the players came up with Gretchin Kapafulshlaggen of the midfield Kapafulshlaggen's. Don't ask me to speak it - I have enough trouble speaking simple English at times!) It was a different way of getting a group together to already have some back-history. Several games have this sort of built into the character generation now (one of the things I do like about Mongoose Traveller! And the Fate game worked in a similar fashion to get the characters together a bit less awkwardly). And we've carried on the world building in a group chat message where we share silly things, memes and fun links. But there is some in-character postings as well. And Truble has eaten food stored in a kangaroo pouch. It was a bit furry and I was picking fur out of my teeth for a day. Yeah, we get a bit off-tangent and somehow manage to work things into the game. This is actually the first time this has happened, though we have talked about our games before. Just never extended the game into these texting sessions. 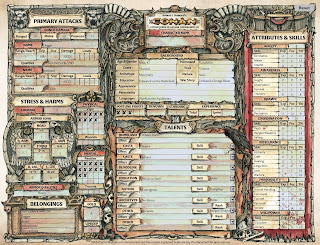 A dense but pretty character sheet

And like paint, I have a lot of dice. And more coming in. Though I do also tend to give dice away as presents. My cat dice showed up, and the orange dice are really for some coworkers (who I play board games with but not yet role playing). They have an orange cat, Simon, and I try to give my immediate co-workers gifts around Christmas. But we've not been in an office for over a year, and the owner realized we are all as efficient outside the office as in, so he is selling the office space.

Anyway, a dreary Saturday and I've been painting some of the terrain. My cheap wash seems to usually work pretty well for bringing out some of the details. Playing with the filters for various effects on the pictures, and you can see my stick-built ladder. And my lack of painting some, err, a lot, of the minis I have. Now I have painted the giant scorpion as that will get used in the face to face game I hope to resume in a month. Always good to have the beast instead of either a die representing that, or a stand-up mini. Though I also have some stand-ups I could use.

Finally, happy that the Dungeons and Laser people added tabs that allow for additional floors. I think I've already mentioned it, but it does allow for multi-level dungeons.

And like everything else, will it get used? When I play the Fantasy Trip, it is a hex based, not square based, combat system. The Ramparts are just walls, so they can be used on a battlemap easily enough. And I think for a lot, the other stuff can also be used for at least the non-combat stuff for getting a feel of things, but I don't know. We can probably fake the hexes in a way. But we have to get back to face to face gaming first!

And speaking of battlemaps, yes, another Kickstarter for a silicon version. I'm getting 2 at the moment as they are really cheap. One with the traditional hex / squares on opposite sides, and a clear one that I am hoping I can lay over the starship poster maps to keep them safe in use. I'll also probably get a few of those tracker sheets for the other GMs in my group. I think that could be useful. If interested, they have met their funding goal. See the campaign here. And apparently I just cannot keep away from Kickstarters. 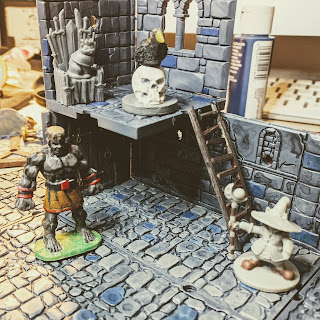 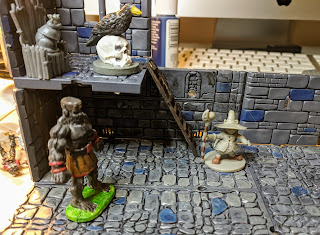