One of my group pointed me to the Apex RPG:

“Diesel”-pulp is a bit harder to define, but simply put: It’s steampunk, but instead of gears and steam, diesel engines have led a new renaissance in exploration, adventure, and more. Dieselpulp is focused on the early 1900s, the Jazz Age, and the aftermath of World War 1, and  the beginning of World War 2. We’ve loosely set our game in the 1930s, but you can run it whenever you want.

And of course the cover has a great image. So, rather than continue with the microlite version (which I may still tinker with later), we'll go with this game. 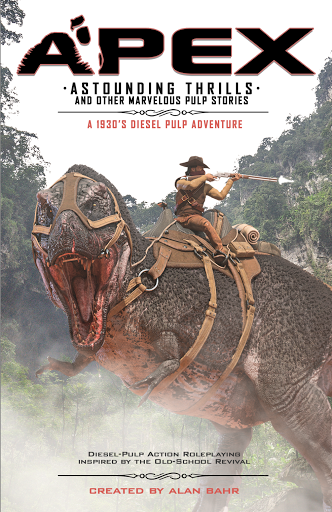 And as I am now painting up some Aztec/ancient ruins type of scenery from the Ramparts Kickstarter I backed, so hopefully we'll be back at a table and I can bring out the flats. Of course, I don't have any minis that would really fit, except I do have several Raiders Lego minis. If I can find them, I think I'd have that covered.

There are several pulp style character classes, and it is a fairly rules-light game. I've breezed through the PDF but ordered the hardback so I can actually ready the thing. And here I said I would not get any more RPGs. But $40 is worth it to have a framework already done versus coming up with my own in my own limited amount of time I do have (having spent over 3 hours waiting for one of my motorcycles to get a new front tire & an oil change. I did walk a lot yesterday at least while waiting. If I only had that book and my glasses it would have been okay. Though I did try a watermelon salad for lunch that turned out to be pretty good!)

Anyway, the classes are as below, and if you've seen any of the Raiders of the Lost Ark movies, or the Rocketeer, you can pretty much envision their Appendix N:

We've just started a Conan game, with an interesting twist to our characters. We're actually playing an family: I'm Uncle Truble Luganson, and fleeing the destruction of our home town I have the twins Lifa and Lofa and their brother Skeld. It was a group decision so that was pretty cool, and we avoided "we all meet in a tavern". Which honestly, I've not actually done in years. But hey, it's a trope.
And hey, here's a watermelon salad (and my not even on Instagram or whatever everyone shares food pictures of!) 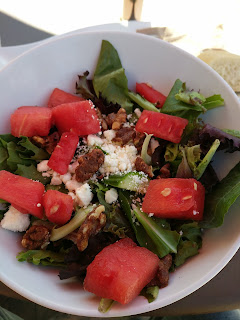 And finally, it's been sort of difficult getting back into my Traveller solo game. I'll try some more, but solo playing is just not the same. While I love creating characters, worlds, starships and all the fun Traveller mini-games, it is just not the same without people. I may have to try & get into an on-line game. I was invited before but the time was not great. Not sure it is any better now, but I do want to play some Traveller!