Playing in the multiverse

Okay, I was not sure what to call this post. But there is Traveller in it! I did end up getting yet another RPG, Apex, to avoid having to homebrew my Cowboys and Dinosaurs game. Fortunately, I was coaxed into it by the player who really wants to play this (though we've moving from cowboys and 1870s to "diesel punk" 1935 or so). And he, and another player, both have the rules as well now (one bought it while we had our session 0 as the GM for that night had to bail for family reasons. And family should always come first!)  So we went with rolling up some characters

Looking through this and generating the characters, I also realized this was in the same milieu as our vigilante pulp game. Realizing that we can have an indirect cross-over event, my plan is to have newspaper clippings that mention the other player characters. While I am not going to bring them in, this could create a shared universe with two game systems. 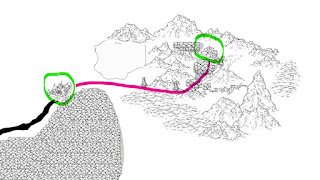 And then I got to thinking: this is a TL5 with a bit of TL6 tossed in. There is no real reason we could not play the same game with Traveller. Though having an air/raft to cover the ground versus hacking through the jungle, fighting dinosaurs and Nazis, would make the adventure a lot shorter. But it would be interesting, at least to me, to run the same adventure twice using different rule sets. Just to see how it plays out. So I may be working Apex Island on to one of my Traveller worlds IMTU. I'll have to look to see the next few systems the No Refunds will be jumping to and see if something fits. If all else, it could be a really high-tech theme park as well. Not as high as the one from the Star Trek episode Shore Leave. 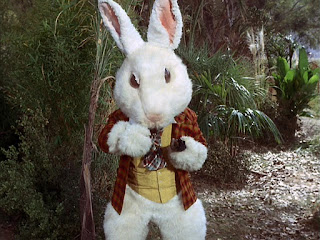 Which brings me to: sometimes there has to be reasons for the players in Traveller to have to travel overland. Back in the early days, the characters probably did not have a lot of the vehicles. The real intent was a more personal game, about ordinary people doing extraordinary things. At least that was how we mostly played, and how I feel Traveller is. I have played with people who do the whole high society thing and it is more of a social interaction game versus an adventure. And sadly I cannot come up with dialog fitting in a real game. And the few times I've tried the play by post games, they tended to meander and not go anywhere. It is hard to set aside time consistently to follow up on things (just witness this blog: my Traveller solo game is over 2 years of real time, and maybe 6 months of game time!)

Now, some game cross-overs may be a bit too far: not sure how dangerous the labyrinth is if you have some high tech backup! 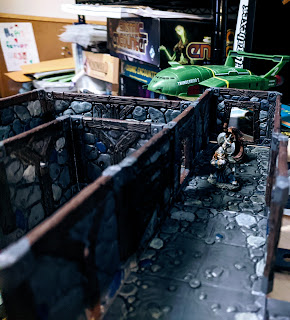 Now, I will say (and probably already have somewhere in the past on this blog) that we did have one game years ago back in college that was a Traveller & D&D cross over. I was playing a gung-ho marine, complete with grav-assisted power battle armor. She shot first and let others ask the questions. Yes, I was trying to play out of character for me (I tend towards lawful good type of alignment. Hey, I want to be the good guy even in my games!) Anyway, the referee really wanted to play D&D, so we misjumped, crashed on a planet. We re-worked the stats into D&D stats, but first thing that comes along was a dragon. So of course the marine gets out and there is this huge battle: plasma gun, man-portable versus magical fire breathing dragon. We managed to kill each other, and some goddess really liked my attitude, so she came back. With wings, so she could still fly. And yes, I also really like flying characters as well. I still have that mini, which I want to say is probably supposed to be an angel of some sort.

Anyway, I do like shared universes, and playing the same character in different worlds. While I also like playing new characters, it takes me a while to get into a character. Which is odd as I will either have an idea going in or let the dice rolls help determine that character. But it takes a while for me to find my voice, so to speak. Which is why I really want to get back to longer games, as well as circling back to previous games and characters. I'd like to get a bit more emotionally invested in some of my characters. At least I think I would - Sir Zay really should have died in a the last game we played (and it would have been a good death, protecting the cleric). But the game master finessed a few things so he is alive, though one of his stats took a permanent loss of a point or two if I recall.

I certainly see the difference between adventuring in the early days of Traveller, versus the kind of "Guardians of the Galaxy" -level stuff I see today. Wrote about it in my blog more than once. Dumarest of Terra would've had to hack his way through that jungle, fighting off hyena-oids with his Blade all the while. If he were to leap from a jungle tree onto a passing air-raft, he'd strangle the pilot and have a ride but of course it would break down before he got to his destination.

It's a matter of power creep.

I agree. Probably why I do like starting with low-level characters for games that do that. I like there to be stakes involved: if no stakes, what is the point? The game I ran a couple years ago, we had a couple player characters that had no real applicable skills. But we worked the characters in: the barbarian's home planet (they called it Bob) was actually the remains of an ancient, very high tech civilization that used nanomachines and a lot of AIs. Sadly we stopped when we met the 1st AI. I was planning on upgrading their ship's computer and a few other things after they managed to get all the way there. I doubt we'll get back to that game: sadly we've lost at least one player due to the pandemic.

Now to see about reading some Dumarest...as we're into pulp games recently, perhaps we can do a more classic Classic Traveller game some time (it will be much later this year: currently playing Conan for another few weeks, and when that gets to a natural stopping place we'll be playing Apex with me running. As we've a few other game masters we'll probably cycle through a few other games before I get to run another. Hopefully Traveller!