After picking up the dragon egg, they return to main circular room. Of course someone grabs the book on the pedestal. Rolling a d4, 3 traps are reactivated: spiked traps, 3 giant snakes, and a razor pendulum. While three of the characters managed to avoid the pendulum, the one with the book did not make their dexterity roll, and took 4 points of damage. Accosted by the snakes, the battle was fierce: giant snakes have a -3 to hit due to their writhing around and, while 1 hex creatures, are still harder to hit. Only half of the characters have an adjusted DX greater than the snakes 12. Our arrow-slinging fighter, with her adjDX of 16, actually can shoot twice. She manages to do 5 points of damage to the ST 12 snake, which is slithering closer to her. With a deft swing of a morning star, another snake takes 11 points of damage while our other fighter is moving behind that snake. The snakes strike, and while the armor keeps our morning star fighter undamaged, our poor razor pendulum fumbling fighter, holding the book, dies from a snake bite on top of her injuries already sustained! The second arrow does minimal damage to the snake fast approaching our archer. The next round, the arrow does more damage, leaving that snake with a single ST but still adamant in the attack! Our morning star fighter manages to finish of his snake. The snake that killed a fighter has no one to fight this round. The snake between the two fighters again manages a bite that does a bit of damage - 4 points but his armor absorbs two points. The third round, the archers snake is charging the lone archer, and the snake without a target moves towards the morning star fighter. The archer misses the snake, and I'll allow her to use her high dexterity to drop her bow and grab her sword (yeah, technically next round she should not be able to fight, but if she has two arrow shots by dint of her dexterity, I could for a player allow a 2nd action. Probably not legal, but hey, my game!) In what turns out to be the next to last round, the sword bearing ex-archer finishes off her opponent, as does the morning star fighter. The one remaining snake actually missed, and next round was finished off;

So, I actually had a character die in the play test here. Several things come to mind. First, a high dexterity is the best thing a person can have: they get to attack first and have a much better chance of hitting. Armor is also important as a damage soaker: our fumbling, snake-killed fighter actually had cloth armor but that did not protect a whole lot due to high damage rolls. Oddly those with heavier armor got light damage rolls. And finally - in my games part of the pre-payment from patrons are healing potions. The Fantasy Trip is pretty deadly and no magical resting heals you. Though I did try to make a cleric laying on hands spell in this post. 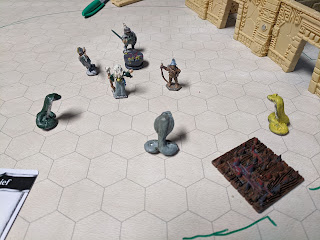 Why did it have to be snakes?

And finally: got my first COVID shot this week, the next in a few more weeks. I am hoping that, as the people I play TFT with will have their shots completed by then, we may be able to get back to face to face gaming! He has a workshop in his backyard and a large table I believe. I just need to make sure I bring over the stuff I need to play! It is not 100% positive: the wife is very protective of her children (I play with the father and his 2 sons; the daughter played a bit but as I think I said before, getting a game that applies to 8 year old girls through 13 year old boys is not easy...) And the final say is always the family.

And speaking of: that's why I did that one shot last Monday as family needs came up. Gaming is fun, but family should come first. Of course, easy for me to say as my wife is usually gone fishing and our son is at college. So I have plenty of time to game. But it looks like our stalwart GM may need to focus on his family a bit, so we'll be swapping games. Not sure if I'll be continuing the Brass Rings game, doing Traveller, or if one of the other players will start a new game. I am in the fortunate position of being in a game group where everyone want to referee a game!

And I need to get back to the Cowboys and Dinosaur game. I've got it roughed out, but it is lacking some details and at least a bit more minimal world-building as a framework on how the cowboys and dinosaurs interact.