So this was created on the fly from the Brass Rings game, but it could be plopped into any game I think with a bit of adjustment. While 1.2 miles is a long way for mice, for human-sized characters just make it 15-20 miles as I was wanting the mountains to be to a day's journey by foot. Thus letting them choose a mode of transportation.

For Traveller, a low-tech world, maybe TL 4-6 or so. For a fantasy game, drop the rail and make it a caravan route and adjust the ornithopter option to fit your game (Traveller 5 & Mongoose both have ornithopters, so it works for that game!)

Going through the Spectacular Settlements, Endkeep Station is a small village at the end of the current expansion to the Royal Rail. With less than 100 critters in the village and surrounding farms, it is a hearty village. Well-built, the smell of fresh carpentry and paint permeate the village when the steam train is not in motion. There are only a few buildings in the town so far. It is a corporate township in that the Royal Rails built the station and warehouse, and it is a staging area for continuing the line into the open area to the east.

Located about a day's hike from the mountain range, the Station is on a vast plain, the soil rich and yielding excellent crops. Most of the farms wrapping around the station have their own small houses. The crops are the major export of the town, going back west via the railway. Equipment and manufactured supplies come in, crops go back on the train. The train runs weekly into the town, and stays 1-2 days depending on what needs to be unloaded and loaded. There is a turn-around track to get the train heading back west. There is almost half a mile of rail further to the east, and a hand-driven track car is used to carry the rails and workers as they extend the rail.

The town's population is about 50% Mice, 25% Rat, 15% Squirrel and 10% a variety of Bugs. Most of the population is fairly neutral: there are a lot of transient workers at times. Law enforcement is handled by the single King's Man, who maintains a small office and a pair of jail cells. (I was thinking of Sheriff Andy Tailor & Mayberry for the jail cells, so perhaps Bernice Longtail has knitted bed covers for the cots in the cells, and Mr. Nibbles brings over the food). Crime is rare in Endkeep Station. The most common injuries and dangers are from the rail work and laying tracks. The Cicada Gang usually attacks the train but has been known to make an occasional raid on the warehouse next to the station.

The town itself is maybe two dozen buildings. The train station is a large building, complete with the town meeting hall, a detached warehouse usually storing supplies for extending the rail past EndKeep. There is a small train office and waiting area for ticket purchases.

The Eastern Hostel is run by Bernice Longtail, a genial Rat. She has almost a dozen rooms available and serves breakfast daily.  Workers for the line usually stay here. Across the street is the sole restaurant, The Grande Gouda Cheese Emporium. Mr. Nibbles, an elderly Mouse, runs the place with an almost distracted air, but has excellent local and imported cheeses, teas and foods. His brood of 7 children help run the place and run errands about town.

There are two places you can get local transportation. Pinky Rat's Ornithopters and Tori Greyfur's Flight Fancy, where you may rent trained birds for flight. She has three pigeons and a duck that is often difficult to control but can carry more.

There is a carpentry shop run by "Bushy" Chitters, a grey Squirrel. He has built most of the houses in the town, and on occasion hires trained workers to assist his single assistant when larger projects need more paws.

A small shop (to be detailed with Remarkable Shops and Their Wares perhaps, though that does lean a lot more to fantasy than steampunk mice! But we'll see) is run by Ophelia Whiskers, a Guinea Pig who has a lot of adventuring equipment sold at 50% more than standard costs. Her rations and locally produced goods are at the regular prices, but she has to import the things that cannot be made in Endkeep Station. She can order goods as needed and they take 2-3 weeks to show up as communication is also via the railway.

Access to Endkeep Station is by the single rail line coming in from the west. It is often attacked by the Cicada Gang, a gang of Locusts with their own steam car. They live on the plains to the west of Endkeep, near the mountains.

The mountains themselves are rumored to have Forerunner Caverns. More than one Mouse or Rat has gone missing in searching for the fabled treasures. 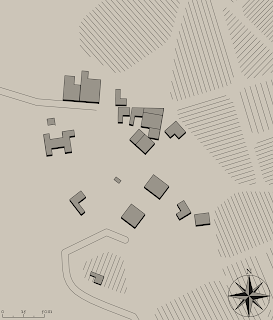 Well done, Sir. Endkeep was a delightful place to visit. I encourage even the most timid mouse to visit this quaint hub of commerce. Avoid the cavern to the north. Forerunner deterents remain and are zealous in the guarding of their post.