Way back when I started playing RPGs in college, the Traveller game we ended up playing a lot was a sort of shared universe. Going from the books before there really was much of a Third Imperium, we created the D'Arlee Quadrant. Not sure who did what, although I think I did most of it. But I also think we alternated refereeing and playing between myself and a friend of mine named Chris.

The Asheville Gaming Club is full of interesting people, and I've found a new friend there that also played Traveller (well, I think he has) but also played The Fantasy Trip. Daniel and I've talked about doing this a few times now, and I think we will try & do something. As this is a fantasy world setting, we may play other fantasy games that can go into that. So this blog, while still mostly about Traveller, may be expanding into trying to describe a shared universe.

Fortunately, the world of Cidri from the Fantasy Trip is a humongous world created by people no longer present. The theory behind this was that published adventures could tale place, but travel far enough or by gate, and a completely new world was basically available.

So I'll try & expand out my little maps from college, which I have posted previously, and also dig up my notes as to what I was thinking. I had a complete small booklet of the various areas. Mostly were based on the miniatures I kept buying: I just got 3 centaurs, so, look, Centaur Island where there are herds of them! I just got a box of skeleton warriors - look, there's the Terrorlands where all sorts of ghoulish things live!

I also want to get better about rumors - just learn to be able to hint to the players that there may be something worthwhile. Drinking at the inn, they overhear one drunk mentioning that his second cousin's third uncle got lost looking for Stuboon's final treasures, somewhere up near Woodfall. And yes - Woodfall was another Kickstarter that is a point-crawl sort of thing with some really interesting possibilities (the recently successful Amazon Island will also be making its way here, so somewhere I need to establish the island).

I also found I had a complete theology involved, for at least my section of the world. I'll write that up at some point as well. 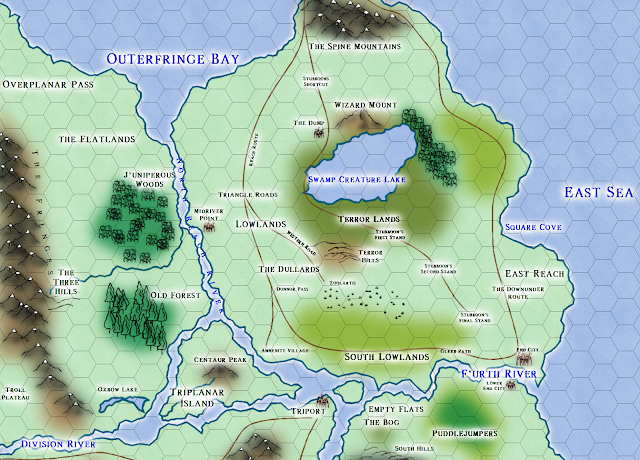