The Fantasy Trip: The Cave Not Taken

Well, now I cannot complain about my players skipping over parts of my semi-plans: the other players & I just did that to our Sunday game.

We had just left the Boogle country after a longer rest than expected after taking care of the Boogles various threats. Being Prootwaddles, their threats were generally not as bad as the could have been. Tis was mostly a period to catch up on some hit points and prepare for the rest of the journey to Edge City. Our plan was to meet up with the Crimson Blade and report on what we found in that ravine. The first night out, Lurbgug took first shift and nothing much happened. Prentum's second watch encountered what appeared to be the Grim Reaper. Edging around the fire, he nudged Lurbgub awake, only to have the apparition disappear. The rest of his night did not go well, and sleep was not very forthcoming. 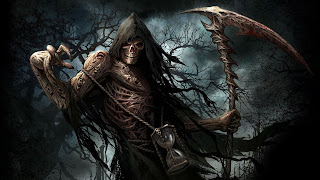 Thunk's watch heard footsteps or something wandering the perimeter of the campsite, yet he never discovered what it was. After a restless night sleeping, Prentum recognized the prints as coming from a Sasquatch. Probably the one that stole Thunk's spiked shield a few days back. Deciding we still needed to get to the city, we continued the journey. Halfway through the day, the cries of something in pain caused us to go off the trail and through the woods. Seeing a giant elephant beast attacking a Sasquatch we decided to help the poor hominid as he was trying to crawl away, crying pitiful sounds. While Thunk and Lurbgub got behind the attacking beast, Prentum readied his bow. The battle was over quicker than expected, though Prentum's arrow had little effect against the beast. While I can shoot twice due to having a high dexterity, those arrows only do 1d+2, so against larger creatures or those with a thick hide, not always particularly useful. I will have to move up to a bigger bow: the light crossbow does 2d damage and with my high dexterity I can still shoot every turn. So perhaps I'll move my strength up next stat increase the one more point I need for that.

After killing the elephant beast, we followed the trail of the bleeding Sasquatch, who seemed to be recovering a bit as he did become bipedal after crawling on the forest floor for a bit. We found his cave, and just inside was a pile of shiny things: we found his stash. And Thunk found his shield! Now, we could have followed the Sasquatch further into the cave: we were all at full strength, and it was what the GM thought we would do. Instead, we returned to the beast, cut off those giant tusks and continued to Edge City. We missed the apparently planned cavern delve and any potential treasure (and dangers) to be found in the lair of the elusive Sasquatch. We also talked about perhaps the 'Squatches have a natural blur effect, which is why they are so hard to track down and see. We also use a Lego Sasquatch that ironically carries a camera, and has been nicknamed the Flashsquatch.

Once at the city by the end of the day, we went to the market to see about selling our Gargoyle bladders and ivory tusks. We found a merchant and traded the gall bladders for health potions (which are really expensive at 15 gold each. We did a bit of haggling, and eventually also sold the tusks for the remainder of his health potion stock, including 3 "big boy" health potions (these do 1d4 of healing, and I introduced them in my games using a small bottle that has a d4 in it so we can roll that. See - I like props!)

Getting directions to the Crimson Blade, we find that guild hall and the Guildmaster. Reporting what we found, we also gave him the map with the 4 X's. Explaining that we had met Cornelius the Black Spider at one of the X's, the other was the ravine where we had somehow possibly died and come back to life (and Prentum still has this urge to seek out and destroy Cornelius the Black Spider though the others have not mentioned that at all). Given a place to stay for a few days while the Guild reviews both the map and our report, we rest that night. Though Prentum's rest is disturbed by the re-appearance of the Reaper. Who again says nothing and disappears before his eyes again. 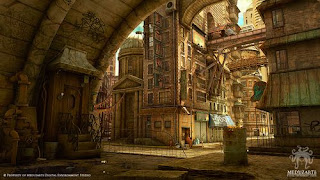 Next morning, we are given the task of clearing out the sewers of whatever that is that is killing stray dogs. Which is coming full circle as my second game with these guys was a sewer adventure. Sadly I have to wait a year for the sewer Kickstarter stuff to show up! The smelly adventure had us following the sewers, eventually finding a stream of blood in the effluence. Following that we encountered 3 fish people. We managed to kill them off with less trouble than expected: we had some good hits and Prentum switched to his short sword for close combat. While the damage is similar to the bow if considering the total, as the sword does it in 1 roll versus 2 he is far more likely to actually damage his foes! In the midst of this, a giant turtle creature attacked us from the rear! Fortunately Prentum managed to kill the fish thing in front of him, and turned before that creature attacked. While Lurbgub was finishing off the last of the fish creatures, Thunk moved to help Prentum. I actually managed to roll a 3 on 3d6 - critical hit! Triple damage! Woot! And sadly, Lurbgug tends to roll like I normally do, though he did not drop or break any weapons this session, there were a few close calls!  But it was exciting to roll 3 ones! After that combat, he put on his blur ring as the continued in the sewers. A larger chamber had what appeared to be a pool of yuck. Tossing a rock in, we saw a fin broach the surface, then were attacked by a shark creature (the GM had bought a lot of interesting minis and as all good RPG players do, is bringing them into play!). That battle caused a bit of damage to our tank Lurbgub but not as much as you would think. We managed to kill that beast, and drinking his "big boy" potion, managed to roll a 1. We believe the merchant short-changed us! Fortunately the shark creature had about a 12 DX so missed almost as much as he hit. A few good hits could have wiped any of us out.

Finding nothing else up this route, we returned to the fork in the sewers and it dead-ended in another cavern. While looking at the smaller cave to the rear, two strange creatures dropped from the ceiling and attacked. We forgot to look up. Never forget to look up! Prentum ducked back into the smaller tunnel to face the one that dropped to attack him, while Thunk took on a giant turtle beast of some sort, and Lurbgug attacked the one attacking Prentum. The battle took a bit more time, and it took all three of us to take down the turtle beast.

We dragged the shark thing back to the mouth of the sewer, and that's where we left this game off.

\We had gone off the planned adventure so the GM made up the market and sewer bit. We're trying to get the boys to do a bit more role playing in the game, but it has not been easy. Really thinking if I can get my other friend to get vaccinated, he would make for an excellent 4th player as he is not only a great GM but also a great player. Having a bit more role playing may help them play their characters a bit more. But we'll see - there are moments when they really get into it and we all had a great time.

We forgot about experience points, so perhaps this week the GM will come up with some of that, and maybe enough to bump Pretnum to ST 12 so I can get a light cross bow. 2D damage will do a bit more damage than the 1d+2. Though we'll have to see if that quiver will take a crossbow bolt instead of an arrow - I can't remember if that quiver is attuned to a specific arrow or any arrow (or crossbow bolt) put into it will work. We'll figure that out when we get there,