Apex Session 11: Sometimes it is better to run away

The characters all leveled up, gaining new traits. Our gadgeteer actually turned down the atomic ray gun to double his sprinting boots. So he can now leap up to 60' and I think 20' straight up. However, the caveat with that is it is no longer an automatic feat for anything over the standard 30/10 foot leaps. Our resident smoker Ilsa chose sharpshooting, making her a crack shot with her Mauser. The academic has been studying the scrolls that were like a Rosetta stone, and while not quite fluent in Linear B, he can read and write a bit of it. Ace, our adventurer, now is a die hard character, meaning once a day, he can come from a 0 hit points to 1.

After we got that all straightened out, the group heads back to the center of the badlands, an ill Jungle Girl managing the trip. A few miles from where they land they do see a dead triceratops. This puts them close to dead center in the badlands, and they have quite the lengthy discussion on which way to go: back north to where they left our feral child's dinosaurs, or back to the river, to see if the dinos had returned home. 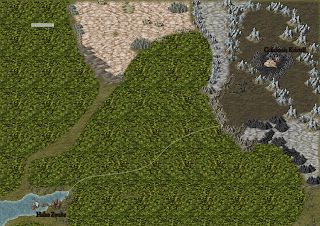 Tong makes some pictures on the ground and they seem to make sense to her, and she starts her call of the jungle. It is still ungawa, just louder and, well, louder. Ilsa, our raider who is never caught by surprise (a nice class attribute), noticed a few miles off what looked to be 3 people on dinosaurs watching. The group hides a bit while Ace starts moving to the group, but coming from a diagonal to keep the original location hopefully secret. Two of the trio head towards Ace, and he can see that they are the Nazon, our triceratops herders they bypassed before. Only they don't know the name of the people (see this post for a description of them). Meanwhile, Jungle Girl is still yowling, so hiding does not seem to be really effective. Ace and the two Nazon get within shouting distance, and they dismount. 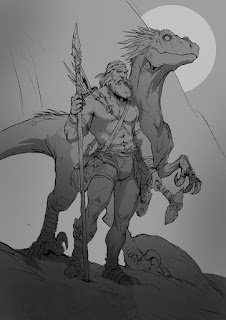 After some gesturing and an entire lack of communication, the group decides that they are not going to get eaten or attacked, so the eventually follow the duo back to the third rider, who appears to be wearing a hat or crown big enough to make Ilsa quite jealous. 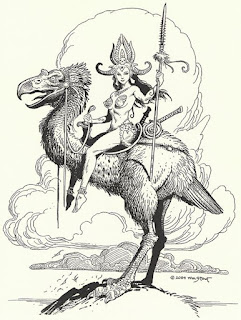 The follow this group back, and the trio point to the dead triceratops. Up close, they could see it was full of bullet wounds. A bit of communication does seem to clear the air that it is not our adventurers' fault, so the group continue on and end up at a camp.

The village has leather tents, more wigwam style, and some cook fires going. Everyone gets some food, and there is a bit of gift giving. Correctly thinking that the woman in the head dress is the one in charge, Tong manages to get Ilsa to give her Archie's sword. The woman seems quite pleased by the gift. She was not so pleased when Tong wrote some Linear-B in the dirt after (finally) noticing that she had some markings on her clothes in that language. And in hindsight, now I wish I had made that actually work as a way of communicating: while Tong can do basic read/write of Linear-B as part of the the level up, he can't speak it as the phonetics may or may not correlate well to the written language that he has been studying the last couple of weeks.

Anyway, everyone gets their fill, and they are offered a space to sleep. The first two shifts go quietly, but Isla heard, just as dawn was breaking, the distinct sound of a diesel engine heading to the camp. Alerting the group as well as the Nazon, they all get packed up pretty darn quickly. Not long after that, they can see a Nazi half-track with a squad of soldiers as well as something Ilsa was concerned about: weaponized dinosaurs! 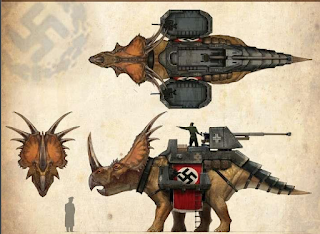 Being severely out-matched. the group decides to flee. They head back to the east, to get to the river. Behind them, they start to hear the sounds of guns as well as a stampeding herd of triceratops. There was carnage behind that they did not see as they were moving as fast as they could away. Perhaps the players, after I talked about a TPK in another game, decided wisely to not face up to a dinosaur carrying a large caliber weapon. Though honestly there was a chance they could have taken them. Perhaps not a large chance though!

By the end of the day, they were back in sight of the tower. Jungle Girl stopped, and then took off. Running to her were her two dinosaur companions! Everyone got met back up, and Archie managed to convince our feral woman to go back to the jungle. Along with a handful of chocolate. Deciding to not stay at the tower in case the Nazi's followed them, they followed the path Jungle Girl took to get down the precipice to end up at the jungle. Finding a good spot to stay, and with the smell of pie wafting through the jungle, our group settles in for the evening.

And here is where we stopped that session. I've a few ideas (and yes, there was a pie aroma. A running joke about liking pie so of course it needs to be in the game) for going forward. In theory we could finish the game at a good spot in the next session, but I think it will actually be 2 or even 3 more. But we'll see how it all goes. They are almost a week of hiking through the jungle if they follow the river to Hafen Zweite. Getting the boat repaired, and back to Charlie Allnut, will take a few days off that. But the end-game for this game is getting the boat back. Then we may be able to continue the adventures, following Tong's map to the center of the Earth for the next adventure. But we have to get back first!