After finding out I was looking at the wrong set of microlite rules and, you know, reading the last email from the DM with the current rules, finally got all the rules so some minor revisions. Most of these were made during our session 0 / session 1 game last Monday. Sir Zay was transported to the Galon Empire several weeks before our group gets together, and has fought in at least one battle against the dark tide rising out of the Warlands. While a follower of Pholtus, in this strange new land no one has heard of that god, but there is a god of the light, Peltos, Father of Light. Sir Zay has had many discussions after battles with the Sea Wolf, a leader of a human fighting force. Now in the city of Bastian, with his one time commander wounded beyond the touch of Sir Zay's healing hands, Sir Zay is starting a new path. Still in the battle against the dark, he has met up with new companions: Flick, a quiet dark Elf who seems to move with the Shadows; Stern whose name matches his demeanor, a monster hunter with a tragic story; and Father Tobias, a cleric of the Lady of the Hills, the Argent Lady. Our group has been brought to the Council of Five and tasked with retrieving manticore poison to fell the dire beast attacking the last city against the horde.

Oddly, I actually have an entire page of notes I was trying to keep while playing. I've said that I want to grow into the skin of my character, and Sir Zay, raised since birth by his mother, a follower of Pholtus and a cadre of clerics, knows no other way to think. His father was not an adherent of that particular faith, and is one of the reasons, other than being the 8th child, he is wandering the world. He has a need to prove himself and his faith, and as Flick is a self-avowed atheist, I'll see if I can role play that without moving into parody or crossing any personal, real-life boundaries. So I'll have to verify with the player to make sure he understands it is all in-game. And in keeping with my general PG-13 approach to role playing games, we should be okay as that boundary also applies to the more philosophical elements of the game. And now I'll hop off that soap box. It was just a long-winded way of saying I am going to try and role play a cleric with a firm belief in his god and his attempts at adding more followers. Not that paladins do that as much as clerics, but that's my current version of the lawful good paladin I am playing.

Now, back to the character himself. Stats have all stayed the same (and oddly he is actually weaker than the other players in many ways, but I actually favor playing an underdog in some ways as it makes you think). And I do roll crappy when gaining hit points for leveling up.

So we're still at strength 17, dexterity 14 and mind 14. He has +2 weapon mastery, soldier 2, aristocrat 4, Cleave, lay-on hands that cures 3d4, divine smite that acts as a silver weapon when attacking evil or undead if I read things correctly. He has a 23 hit points, armor class 17 and a single action point to use judiciously once per session. His weapons are as before - the great sword doing 2d6, the great ax for 1d10, a heavy cross-bos for 1d10 and a javelin for 1d6. He carries in addition to the regular adventuring gear equipment to maintain his armor. Each evening he meditates, and part of the meditation is a ritualistic yet effective cleaning and polishing of his armor. Not your traditional armor, it is more Asian styled similar to the image below but adorned with the sun and moon symbo; of Pholtus. It is, as noticed by his travelling companions, shiny though he does have a cloak should stealth be required. Or as stealthy as he can be wearing several pounds of chain armor. 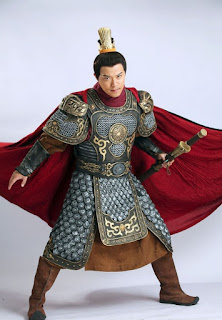 Now I did say last weekend I'd try & get another Solo Traveller post in. So far there just has not been time and opportunity simultaneously. I have been working on painting the science fiction terrain tiles from my Kickstarter. I made my own wash that I am pretty happy with, and trying a few different things that the camera is not really picking up too well. The core set is the dark wash, then a heavy blue dry wash, then copper wash on top of that for the flat pieces and some other colors here and there. The AI control room will have the same dark wash, but trying for a lighter blue first layer of dry wash, then a light blue wash on that. The engine room has the dark wash and dark blue first dry wash, then a silver/blue wash on that for a more stainless steel approach. At least that was the idea. The xenogensis room is dark with a dark green wash to give us that Aliens vibe. I can use that in the Fantasy Trip as well I think. Below is my attempts at this so far. Going for a scuffed, well used Star Wars vs the pristine Star Trek ship style. None of my characters could ever afford the good ships :) 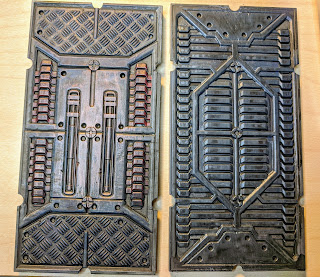