Of Spaceships and Volume

As I back every one of Ryan Wolf's Kickstarters (I did not do the first, but his second, was the Grendel, which is really the classic Beowulf. And so started one of my few auto-backs! And I did go back & get the 1st one as well I believe) I have quite the stash of starship posters, PDFs and minis. For the longest time I was guessing at the tonnage based on squares. Never a good thing, and it turns out I was usually way off.
As he supplies the standard tonnage, it is actually a pretty simple calculation to go from his displacement to Traveller displacement tonnage.
First, 1 ton is 100 cubic feet. This is 2.831685 cubic meters, and when dividing by 13.5, gives you .2098 Traveller tons per 1 "standard" ton. So simply multiply his tonnage by .2098 and you get Traveller displacement.

So looking back at the Cygnus from a few games back, I have to adjust everything as the tonnage went from 1000 tons to 1800 tons. That affects the base cost as well as the monthly costs. I'm going to see if I can still manage to get through Classic High Guard (though it does not have an 1800 ton ship, 2000 is what I'll work the components on), Mongoose 2e High Guard (which I bought and briefly read over but have never deigned a ship with) , Cepheus and T5 which will require quite a bit of page flipping. Though there is this T5 ship builder spreadsheet over on COTI if I can figure that out. Though I really prefer going through the actual printed books.
And the general information based on all versions is this is a TL 13 Lab Ship with jump 3 and maneuver 3 and 8 weeks worth of power plant fuel. With fuel scoops and a fuel purifier this ship can last months without having to be at a port to purchase fuel. At that point, each version has its own layer of things, from various armors to specifically having med and science labs. The hull is probably a close structure which is partially streamlined.
And after walking through the Mongoose version. I think I'll do the Cepheus and T5 in their own post as well. Cepheus I think is more LBB 2 style, but could be wrong. And I am not entirely sure I have those rules: I did a bunch of PDFs in a bundle and I know the core rules are there as I've used them to play with character generation, but do not recall if ship building rules are part of that.

Probably not perfect but good enough for gaming. Minor updates to the tonnage for fuel and all that. The classic High Guard does not really give a lot of options for things like labs and medical bays, but it was for running ship battles more than role playing. I just like making custom ships!
This graphic was done, by the way, via Google Draw. A few tables getting formatted just so. Tried to recreate one of the many classic ship forms. If anyone asks, I could make a blank drawing that I could share so you could fill in the blanks yourself. That was one thing Classic really had going for it: lots of forms. While not for everyone, I really like them and use them often as handouts and chrome while playing. Old school paper! 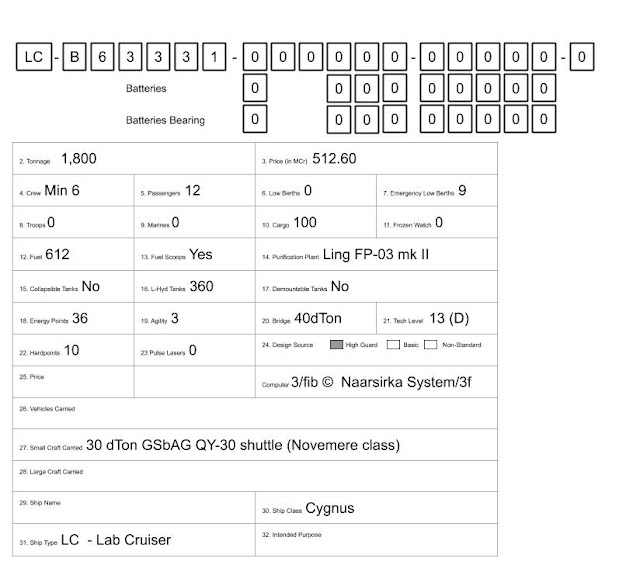 Using the T5 spreadsheet these are the initial results. What is missing is the armor info which I added in the 2nd paragraph coming from the spreadsheet.
Using a 1800 Dton streamlined hull, it has a J Drive N2, a M Drive C9, and a P Plant N2 giving performance of jump-3 and 3 g acceleration. There is fuel tankage of 583.2 Dton, enough for 8 weeks and 1 jump-3.
Controls consists of eleven control consoles, nine operating consoles, and a m/3 computer with Ergonomics 2.
There are seven sensors: a communicator, a commplus, two EMSs, a scope, a neutrino sensor, and a grav sensor.
Crew accomodations consists of 4 staterooms with a Comfort of 4 and two crew barracks.
There is a carried craft: a Shuttle in a hangar.
Cargo capacity is 722 Dton. The ship requires a crew of 14: a pilot, an astrogator, an engineer, a maintenance, five specialists, and a flight crew. The ship costs MCr 446.65.
Using a charged frame, we have an armor value of 52. Coated with reflec we have 1300 vs Heat/Beam. The outer armor is an anti-radiation layer (AV 26, 260 vs bast, 260 vs H/B, 1300 vs Rad, 0 vs EMP) and we have another anti-EMP layer of armor (AV 26, 260 vs Blast, 260 vs H/B, 0 vs rad and 130 vs EMP). This ship is designed to get up close to potentially hazardous areas.
Now I may go back through this by the book just to see just how complicated the T5 rules are. There were several discussions as I recall over on COTI (my main source of Traveller outside of the few blogs I do read). T5 uses fill-forms to help. And I want to say there is an iOS ship builder out there. I'll devote another post to the book, step by step, creation of the Cygnus class lab ship.

Having yet another spreadsheet, we get something as below. This spreadsheet does not generate a nice blurb. And I think I broke it, so a quick walkthrough of the 2nd edition High Guard Book.
First, the hull. A close structure hull displacing 1800 tons gives us +10% hull points and a -10% cost. So Cr50K/ton = MCr90 but with our 10% discount, MCr81. Armor is always good as this ship will be exploring strange new worlds. Using the standard Crystaliron armor available at TL 10 it requires 1.25% of our ship or 13.6 tons and costs MCr4.05/armor point. Lets put 2 armor points on there for 27.2 tons and MCr8.1 added to our costs. There are some additional hull options available. The emissions absorption Grid sort of sucks in electronic emissions, and stacks with stealth (and we won't get into the whole giant heat source is sort of hard to hide in space discussion). While not directly something a lab ship needs and interesting, I think we'll pass on that. Heat shielding, on the other hand, would allow us to get the ship closer to stars and other hot phenomena. It also helps us crash land safer if our grav drives go out. Cost is 0.1MCr per ship so MCr180 to add our heat shield. Same for radiation shielding. At MCr.25/ton this is MCr450. This is pretty expensive! The remaining options, stealth, improved stealth and reflect do not seem to apply to our ship mission.
Next, our drives. We want Man3 which will take 3% of our hull or 54dTons and cost MCr104. Our Jump 3 drive takes 7.5% of our ship or 135dTons and costs us MCr202.5. Using a TL12 fusion power plant we will need to have at least the following power points:
As it is unlikely we'll be using the jump and maneuver drives, that gives us a minimum of 540 energy points. At TL12 we get 15 points per ton, so a 36 ton power plant would cover that. As I want extra for the various sensors and bays (and not sure if they technically take energy points) I'll just round to 40dTons for the power plant at a cost of MCr40.
The drives of course need fuel. Manuever drive fuel is part of the power plant fuel, so nothing there. Jump is still the classic 10% per jump, so 30% is needed. Power plants need 10% per size for 4 weeks, and as I want 8 weeks that would be 4 tons for 4 weeks and 8 for 8 weeks for a total of 548dTons for fuel.
Our bridge based on its size requires 40dTons at a cost of MCr20.
We need a computer for all this, and being a lab ship, it probably has more that are specific to the labs. But our central computer is a TL 13 Computer/25 at a cost of MCr10. It takes no direct tonnage. There are options for a hardened core or one that specializes in jump to coordinate fleet jumps. Neither is required for our lab ship.
Sensors are next on the list, and this is where our shopping trip may get even more expensive! We'll go whole hog and get the Advanced. Though this is a TL 15 sensor suite, the original story behind the ship is that it is a Navy/Scout joint operation and the Navy runs at TL15 as much as possible. It also requires 6 energy points, which as I bumped up means we can run the full suite while maneuvering about and still have the full ship functions. MCr5.3 and includes densomiter, jammers, Lidar, NAS (Neural Activity Sensors - I've got Grand Census and the portable version is described in there) and radar.
No weapons though we have 2 50 ton bays and several hard points. This is a decommissioned ship released for private use via some high-standing political influence and has no weapons.
Optional systems. Though not sure how crew is optional! At a minimum, we'll need a pilot, an astrogator, 3 engineers (I like to "over-engineer" and one may be for the shuttle as well). a medic. There are also specialists as this is a lab ship. Our minimal crew is 6 with room for several specialists depending on the mission. The staterooms are defined by the deck plans, and has 6 big staterooms and two barracks-style that can contain 4 each. Plus what looks to be 2 brig cells but could be repurposed as small staterooms.
All the rest is cargo. So, let's tally up and see what we have.
Cost: MCr 1,100.4. Just over a billion credits!
Tonnage: 1800 - (armor) 27.2 - (man) 54 - (jump) 135 - (power) 40 - (fuel) 548 - (bridge) 40 = 955.
Now there are several more options left to add. Being a science ship, we'll add a sensor station for MCr0.5 and 1dTon. There will be a cargo crane x2 (one per side) for about 1dTon and MCr1. We have an advanced drone bay for 1Dton and MCr 0.8. Throw in the advanced signal processing that also takes 2 energy points, MCr8 and 2Dtons. Our very Star Trek like Life Scanner Analysis Suite requires 1 EP and takes 1dTon and MCr4. Technically the TL14 version is not available but refer back to the Navy/Scout program above.  The hanger is technically a full hanger so takes 60dTons and costs MCr12, We have 3 labs on board at about 15dTons each by counting the squares, so total of 45dTons and MCr12, The med bay is part of the biology lab. There is also a gym that looks to be about 15dTon but that cost will be minimal. There is actually another 30dTons for common areas at least
So the new tally:
MCr 1,100.4 + MCR40.3 = MCr1,140.7
Remaining displacement = 955 - 154 = 801dTons. Which still seems way too high - looking at the cargo bay areas, we have 7x9 squares so about 30 tons, plus an upper area. We'll just make those 6 meter ceilings and double height, plus there is more cargo area on the platform above. And the shuttle bay is definitely taller than your 3m ceiling.
Probably more storage areas throughout the ship but this is close enough for us.
Next post or two, I'll see if I can muddle through the T5 process and see if I even have the Cepheus version.