Apex Session 2: Hafen Zweite and up the Ulano River

We often have a lively chat going on over texting, extending the game outside our actual sessions. I will often take that and incorporate elements in game. I was talking about avoiding flocks of pterodactyls and this came up:

Oh yes, quite! I say, is that a Quetzalcoatlus northropi outside the plane window? Did you know we once thought they were skimmer fishers, but after observing then we discovered that actually prefer to scavenge? They also rarely fly, except to chase prey or escape predators.

Isn't it odd it's flapping right towards us?

So yes, we opened the game with this approaching the plane: 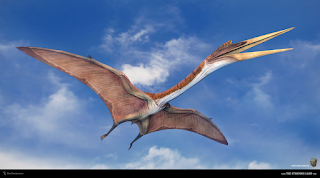 This is about the same size as the plane they are in (hmm, I've not heard if Ace has a name for his plane) and it was flying closer. Not having any rules, I just used the old Traveller encounter reaction table. Rolling a 5, it was a bit peeved about this metal bird invading its space. Ace does some banking to get away, and a roll of 2 meant that the quetzalcoatlus have moved from peeved to downright upset! It was closing in on the plane, and Archimedes, our gadgeteer who does have a rifle, leaned out of the plane for a shot as it got into range. He missed even without a possible disadvantage due to hanging on to a plane while trying to shoot. However, the shot apparently scared it off, and the large "flappy death-bird" veered off and the crew flew on. My next reaction roll was an 11, so no attacking the metal bird invader! One shot and it was gone, so there was only a few moments of peril.
They then flew over to the temple, about an hour or so flight time. The river ends a full day's hike from the temple, and was too narrow and too overgrown with trees to be able to land. One does not merely fly into the temple. It was mostly overgrown, but they could see the ruins of the temple. I forgot to point out the giant crevasse, as well as the mostly dormant volcano the temple is adjacent to.
They fly back to Hafen Zweite, landing at the South Docks, and meet Pierre LeFranc. Having a dozen years of French more than a couple dozen years ago, I managed to pull up some of ancient French at least for this character. Getting their papers signed and all that, I pointed out the giant inked map on the back of the office, hoping to generate some interest from Dr. Tong, our map-enthused academic. He did get the hint, so mention was made of Vito's bookstore, home of maps and odd tombs. The books are a direct pull for the German scientist/raider Ilsa, so I was hopefully covering half of the group with some in-game pulls.  They also see a German steamer that is to go up the river: apparently there is an expedition to the temple that Ilsa was unaware of.
They do go to the bookstore, and there are some obscure and ancient tombs. Vito professes he thinks the island is a nexus of the occult, as he has books Ilsa has dreamed of having. And maps with similar runes as Dr. Tong's. The books were not for sale, but he had heard rumors of similar books in the temple far in the jungle. And Vito proposes a trade of any maps found to allow our academic to copy the map. He has, of course, missed yet another meal. Archimedes (who I want to keep calling Archibald, must to my shame as for some reason I am always screwing up this player's character names!) and Ace wait outside. Isla steps outside when they see, coming from the barracks, a couple of soldiers and a scientist co-worker of Ilsa. They duck back into the shop and out the back door, and Dr. Madar does not see her compatriot. Having copied the map, the group collects camping and climbing gear, and finally some food, and head back to the docks. There are some small dinos eating the trash and scurrying about the dock, but nothing to bother our group.
Next morning, Archie takes a critical piece of the plane engine so no one can take it. They rent the Apex Queen from Charlie Allnut. Ace & Archie have done a lot of tourist (and possibly some other) business so it is not an issue. The little steam-powered boat starts chugging up the Ulano River. The morning goes quite peacefully, but in the afternoon Ace & Archie noticed ripples following the boat. And that was the cliff-hanger we left it on.
Now, there was very little action in this session really. It was mostly setting things into motion: they now have a better map of the river, including notes about giant spiders and Fort Shone. They know that there is another expedition in a larger and faster boat leaving the next day, meaning in theory they will reach the head of the river at the same time. There is the potential for occult books and strange ruins to be found. And the McGuffin of the crystal. Which has additional meaning as the Dr Madar is actually a level 3 gadgeteer, and has a couple of crystal-powered weapons.
I am hoping the next session involves at least 2 rounds of combat, and I still have to figure how fast they are going and the scale of the map. Figuring 3 days up river in the boat, but there are a few potential encounters I do want to work in. Some of them are based on what the players have given me as background. That's where the occult books come from, and a few things from other players. And I also want to throw in a feral child at some point who does the old-school Tarzan ungawa, but for dinosaurs instead of African wildlife.

And I am compiling a rough PDF for my notes and things. I'll link it when we finish the initial adventure.
Posted by Craig Oliver at 8:50 PM