After a day of recovery (that fast drug works miracles apparently, although Travis is still sore and Pennity will be in the hospital for a few months) our Travellers take the Renegade Scout Ship to the Way Station.  I had the poster of the ship laid out & we got to look that over a bit, but as it was just a 2 day trip or so to the Way Station, it was simply there to look at.

The first stop in the belt was at Ming Station, the main administrative hub. They met the Way Station Scout Commander, transferred the funding form the Countess for the new fuel purifier, and opened some initial talks about possibly sharing research from the Lord Fish deal.

They then took a shuttle with the scientists from Le Suroit to a Vanguard class station (another poster map, again just there for looks) where they caught up with the engineers who were finalizing the ship updates.  The Lab Ship now has a spoke that goes all the way through, which contains both the fuel purification system as well as enough fuel so that they can still do a Jump-1. Their manuever spped has dropped a little, so intead of 1G they have something like .95G - close enough not to worry about.  Ferdinando has the drives all recalibrated for the new mass and volume.  While Travis went on a simulator to verify he could still pilot the updated ship (and had 2 very unsuccessful rolls with finally getting a succes - we pictured the scene in Galaxy Quest when the pilot takes the ship out, scraping the port), Li made the rounds and I made reaction rolls for each of the crew. Even without a persuade DM, the lowest was a 7, the highest a 10. So the new crew member apparently fits in quite well.

Sadly, I really had nothing at the Way Station that needed doing despite having my nice big map of Flash Gordon references. So after another day of getting things packed up, the crew move out 100D from the belt, and make the jump to Kryslion.  Travis rolled a 7, so the just while successful will be a bit further out than 100D.

And so I need to start the Kryslion world work up. 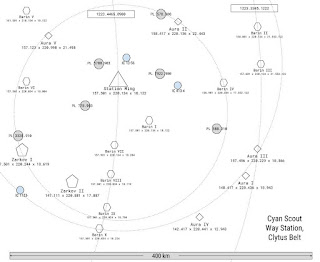