My predictions on what would happen were pretty far off. They did get to the sheriff's office but did not go to Doc Calloway's place to check on Spotter Horse nor the unconscious Slim, the only remaining gang member from the day's shoot-out.

I did have an outline that they followed a bit, but there were a lot of paths once they actually got into town. Travelling back, they got more of Molly's story. I introduced Jack Slade the previous session: he is her ex-husband who had done some bad things. The conversation went on for a bit and I had them roll up on the random encounters. A small herd of Parasaurolophus passed them but posed no threat. About an hour out of town they met up with Chang Heng-di, a Buddhist monk walking to Aurora. 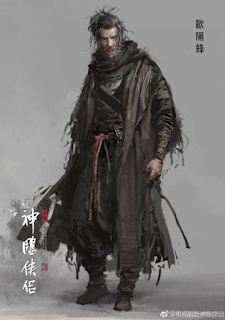 Hambone is not sure what "Budder" is but seems okay with someone who follows those tenants. Jack Looking-Horse proved to be a quiet man, though Hambone insists he is quite the jabberjaw and can't get a word in edgewise. He is offered a ride on Milly, seeing as Molly is on Puddin with Hambone while Volgol circles above, eating the occasional buzzard as he keeps an eye on the group. Hitching up behind Jack, they continue into town.
Once there, Heng-di parts ways, heading off to Chinatown. Molly, Jack & Hambone head up to the sheriff's office. Sheriff Shelton is not there, but his deputy Beauford "Bo" Smith is. A large Black man, he is still dwarfed by Jack. 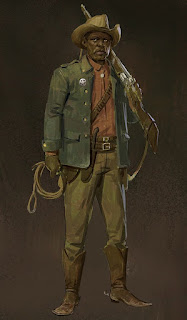 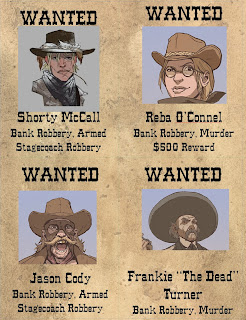 They do notice and read up on the wanted posters and fill out their statements. A bit of conversation about the angry women on the posters, though only Reba is a woman. Eventually one or more of these will show up - the old Chekov's gun principle at play here.
Seeing as it is supper time, they decide to eat at one of the saloons. While Bo was invited, he politely declined as he was still on duty until the Sheriff got back. They head to the Brewer's Goose (apparently at least 1 player actually read my huge PDF and he brought it up!) and get some supper. Beans, corn bread (which devolved into a real-life discussion on corn bread). The Goose was actually generated by the Two Minute Tavern, a Kickstarter zine that, while fantasy-oriented, was useful for this as well. The owner, Fran Browly, is an older woman who wears fancy clothes and excessive makeup. She greets them at the door.
During the dinner, the bartender, one Big Frank called out for Verner, the guitar player, to play one of the songs he did the previous week. The players asked if there was a rat nearby, but no, just a small dinosaur. 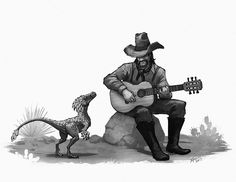 They seemed to enjoy the Easter egg. A bit later, and four young men were getting visibly drunk and visibly irritated by having an Indian in the saloon. Getting aggressive, they start a fight. As it started, most of the patrons picked up their plates and moved to the edges of the room, eating and watching the entertainment. Miss Browly was getting flustered, her fan waving rapidly in front of her face. It lasted all of 3 rounds, but basically: Neil (the most aggressive one) swung and somehow missed the 300-pound Indian. Who did not miss with his warclub, smacking him across the face. Meanwhile, Hambone punched Jake in the pie-hole, while Seth was asking the boys to set back down. Molly attempted to help by throwing a chair at Frank, but missed and managed to knock over Seth. Jake manages a light tap on Hambone. Being an iron-jawed man, Hambone barely noticed. Another swing of the warclub brought down Neil, a bloody yet still alive mess on the floor. Jake missed Hambone, and Frank missed as well while Seth was getting up off the floor. A swing of the warclub takes out the right knee of Jake, who goes down alongside Neil. Frank and Seth are about to attack when the click of a shotgun getting cocked makes everyone pause.
Big Frank kindly asked everyone to stop. Miss Browly has her makeup smeared between sweat and some blood that got on her. As Hambone tries to help her, she starts flirting with that man, who says she would be a whole mite prettier without all that makeup.
The sheriff does show up, gets what happened, and as no charges are being pressed, helps everyone get straightened out as Doc Calloway and his nurse Alice get the two downed boys on stretchers and out the door to the doctor's place. Mr Rogers puts his knotted string back up as there are no deaths (Mr Rogers is the town mortician and carries a knotted string to measure out the bodies. No one seems to know his first name. I think of Lurch for his character basically).
Jack mentions that Spotted Lily, Spotted Horse's dinosaur, was killed. Being that was how he ran the pony express. perhaps there was a way to replace the dino. The sheriff promises to write a note to take to Captain Dalton, head of the local Pony Express office. Said he'll bring it by the town station in the morning.
Jack & Hambone head to camp outside of town while Molly goes back to her women's boarding house ($1/week for her 1 room). They camp out in the cool evening, watching the stars circle above as they fall asleep.
Next morning, the sheriff leaves the note with Mr. Oxford, who is still badly hurt by Jack. She flies out and meets up with Jack & Hambone and they start back north again to the station.
There was a brief encounter with characters from another Western game, which in turn had a character I played in yet another Western game. Western Inception if you will! Anyway, they were heading north when a larger herd of Parasaurolophus was stampeding towards them, harassed by raptors! And on that cliff-hanger, I finished the session.
Several things: that session was a bit slower, but at least there was a brief fight. I do like to try & have at least one fight per session. Session 1 we introduced one of the bad guys, Jack Slade. This was an NPC from Molly's background. Next session I'll be giving a bit more weight to John Chisum who was briefly mentioned this session. He is a cattle baron whose cattle are starting to move into Jack's tribal lands and where his dino herds are. And there was a brief mention that Ranger Martel was heading up from Texas following a lead. They got that info from the sheriff.
Basically, I'm setting up each character's personal foe/enemy/NPC. It will take several sessions to get to a resolution of most of the threads, but I am hoping to keep everyone both entertained and all have something to gain or lose. It does help that I do have that character relationship chart as I am still horrible with names. But Hambone actually saved John Chisum's life, so that is intertwined with both Jack Looking-Horse and Mr. Hewiggans.
I did get permission to post both Mr. Hewiggan's background and Doc Calloways. I'll do that next post or two as they are pretty good. The author is a big western fan, and I think manages to capture his character well. Plus, it makes for an easy post! Copy/paste.
Posted by Craig Oliver at 8:45 PM