More Plastic Scenary - Will I actually use it?

This year there is a LOT of plastic showing up: I received my Dungeons & Lasers 2 stuff and I am working on that, the Bones, Nord and Blacklist minis should show up, probably all on the same day. There is probably close to 1000 minis there that I will, at the rate I am going, will finish painting by the turn of the next century. And I am almost certain they will all show up on the same day.

I have been doing some of the washes and dry painting for the terrain pieces with varying success.

in the Dwarven mines
The fantasy is a lot easier than the science fiction stuff in many ways. And sadly I am in for the D&L season 3 campaign because they have these sewers. And I've had 2 adventures run in sewers so far.

But: will it ever get used at the table? We've been playing the last year via Skype, entirely theater of the mind. While that does work for most gaming, sometimes I just need to see how the adversaries are positioned. And that does not need minis per se as I've used dice and coins to show the relative positions of people during games. Still rocking my battle map from college, though I did get a new one that is double sided, with hexes on one side and squares on the other. Anyway, while at least one of the other players has even more plastic than I do (and does a fantastic painting job!) we've yet to bring this to a table.

On the other hand, my Fantasy Trip group is all about the minis. They even bought a 3D printer to print their own. Although it turns out 3D printing is more complicated and time consuming than they thought. As we've all had our shots, I am hoping we may be able to start back with face to face gaming soon. And bring on the giant scorpion!

Even if I don't get to use them (and figure out how to store them so I can find what I need!) I am still enjoying (at least sometimes) the process of painting. Even if my eyes have a hard time seeing the details at times. And as I bought a lot of flesh tone paints, ranging from light to dark, orc to troll, I have a lot of possibilities. Now to just practice until I get better!

I also really need to work on the model building. Or get some green stuff or other filler. I am just not particularly good at putting models together. Need to slow down and take my time. But hey, from a distance it is looking good at any rate! 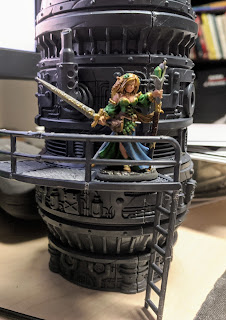 Not sure why an Elf is on a plasma silo, but I would play that!