Cowboys and Dinosaurs - A Bit of Progress

Using the Microlite rules for Tumbleweed, I've added a new stat, a new class and a new skill:

New Stat: Dinosaur Empathy This stat is how well you can control dinosaurs. You use your stat bonus as a DM for tasks (which I really need to figure out as well). Like the others, you roll 4d6, subtract the lowest for your score. Your stat bonus is (score - 10)/2, rounding down.

New Class: DinoWrangler Wranglers are more attuned to the world of the dinosaurs than most people. While everyone does have the ability to bond with the dinos, it is always a single dinosaur raised from the egg. Dino Wranglers have the unique ability to bond with more than one dinosaur, up to their actual dinosaur empathy roll. They also get a +1 per level for controlling their own dinos, and a +1/2 levels for controlling non-bonded dinosaurs, and a +1/4 levels for controlling other dinosaurs that are bonded to someone else.

New Skill: DinoWrangling Handling a dinosaur is different than handling a horse. And a carnivorous dino will try to eat a horse if you are not controlling it! Dinosaurs come in all the traditional dinosaur types, from a pack of archaeopteryx attacking the herd, to the brontosaurus hauling the family cabin on the prairie.

Basic tasks are riding, hauling and carrying. Riding a dino requires you to be bonded to that dinosaur and is normally an easy task. Though if you are riding a hungry dinosaur it is more difficult when there are other animals or even people around.

I've a brief overview of things to do with your dinosaur. Controlling your dinosaur. Dinosaurs are not horses, and in this universe, are a bit smarter than dogs. Control is based on your stat bonus:

0 – you can ride your dinosaur like a horse, and make it haul things as long as you are in contact with it. Your connection to your dinosaur is barely there, and only allows for the most basic activity.

1 – you can call for your dinosaur and it will come running if in auditory range (Hi Ho Silver). You have a vague sense of what your dinosaur is feeling (fear, hunger) and it will have the same reciprocal sense.

2 – you can silently call for your dinosaur. Range is your dinosaur empathy stat x 100 yards. You have a much better sense of what your dinosaur is feeling, and can feel its pain. You can also get vague inklings of its senses (sight, smell, taste).

3 – there is an intense bond between you & your dinosaur, it is almost as if you can talk to it. Not only can you call to your dinosaur but you can give it simple commands.

4 – you and your dinosaur are like 1. It is almost an extension of your thoughts. You can give complex commands to the dinosaur.

These are really all ideas, what I call my spaghetti on the wall: I throw a lot of things out there and we'll see what sticks.

There is some backstory for this universe: dinosaurs still exist! And in the Old West, are used similar to horse, oxen and guard dogs. The difference is that some people are more attuned to dinosaurs than others, and you can bond with a dinosaur. The bonding happens when the dino hatches so the cowboy needs to be present within the first few hours to be able to bond. A bond is for life, and depending on the strength of the bond, you & your dinosaur may be able to feel each other's pain. I'm putting that aspect in there to prevent people from using dinosaurs as just weapons. Not sure how well that will go over but hey, I'm doing the basic design work so I can put in the ideas I want :)

Still working on the actual dinosaur part in terms of AC, HP and all those stats that I am just horrible at. Going from a list of dinosaurs I found, and already there are some ideas out there. The archaeoptyrix attack herds of sheep and things, and there could be velociraptors that hunt cows and horses. Cowboys & their dinos are hired out to prevent that sort of thing. I think there could be a version of Blue from one of those Jurassic Park movies, that sort of thing.

On the bright side, it will be months before we get around to this game, so I've time. 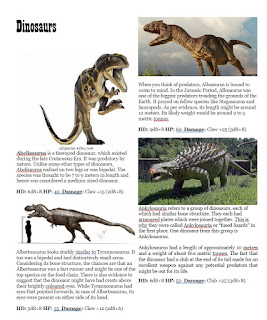