So we've had 3 sessions so far with Sir Zay getting transported from the D&D world of Ravencroft to the homebrew world we're in. And we're having a lot of fun. I am also really enjoying being able to learn more about my character via play: just writing a background up gives be a basis for who the character was, but playing a character you can see who the character is. And who he is becoming. In college, some of our longer game arcs allowed this sort of thing. And the other group I play with, though I am the GM, we've played the same characters (well, except for that 1 PC death! And actually, if the player wants to bring him back, there could be a death quest. I have the Spiral Islands from Kickstarter which is the land of death with the way back. So if they really wanted to bring him back, we could try that. Or they all end up stuck on the Spiral Islands....)

So it is a lot of fun. We may be bringing another player on-board, and I sent the GM & him the following recap. I've read that the players should let the GM do the recaps, but our GM is a first line person working way too many hours and yet manages to give us a very entertaining game. He is my current role model for how I want to run games: fun, mostly a sandbox with overriding plans, but fast on his feet with characterizations and handling what we throw out there.

Anyway, here is the recap, just a copy/paste from the email. I did give the group the random table for mutant telepathic rats from  Tales of the Smoking Wyrm, another Kickstarter of some gonzo things I need to read & use. While I don't think Bill the Rat is more than the best of poor Bill, the previously possessed clerk, one never knows! Hopeully the DM is okay with me publishing this, but as I've not many readers outside the group, think this is okay.

Session 1: Background: The War of Shadows started 4 years ago in an ancient city in what is now known as the Warlands (previously known as the Middlelands). In the Free Nations, the high ranking nobles were killed off at some time to shake up the power structure in what is called the Night of the Bloody Stars. Their missives were received and they were killed off as well. The Warlands started burning, and troops emerged from the great chasm known as the Scar. The Free Nations started building a standing army at Bastian. Surrounded by a lake, it is now a fortified city built up rapidly over the last 4 years. The last major battle was horribly lost to the Forces of the Shadow. Bastian power structure is lead by the High Wardens, a group of 5, then the Wardens who are the leaders of the Free Nations, and Yeoman who are heroes of the battles. The island to the West is the Galon Empire, all humans, and where Sir Zay (my character) found himself transported to a few weeks prior to our game. He travelled with Sea Wolf , their leader, who was gravely injured in our last combat. While Sir Zay still somewhat confused, knows that this place has not heard of Pholtus but does have a Peltos, Father of Light. There were many philosophical discussions, but after Sea Wolf's injury, the laying on of hands seemed to do more harm than good. Something repeated later, yet Sir Zay is a true believer...
Bastian is known as the last light against the darkness, and has about 20 thousand people. The guards are known as the Gargoyles. Grey Wolf is the leader of the Gargoyles.
Our group met up at one of the notice boards: the Wardens were looking for a few good men (and women). Sir Zay the Paladin (me), Stern the Demon Hunter (Jonathan), Flick, the (rogue?) Elf (Scott) and Father Tobias of the Lady of the Hills, the Argent Lady, the cleric NPC played by Danny take the notice & head to the castle up high. Introduced to the high wardens: the Arch Warden is a scary Elf, Suthiel (sp?), along with a heavy Dwarf (Amish?) wearing heavy leathers and tattooed serpents, a huge grey skinned human 7'8" tall, a human from the far south, and Erin (sp?) Knight of Elom Holt. We are given a view of a great beast pounding the walls via a telescope and tasked with finding the missing manticore venom, the only thing they think can kill the magic-created beast. Unfortunately the cask with the poison was stolen by clerk Bill who is now in the deepest dungeon. We get down there, and when I do a detect evil poor bill screams that he has been cursed. And oddly we smell pears, not a common fruit in Bastian.


Session 2 Bill is in the dungeon with the most dangerous of criminals, 6 of the 8 cells are occupied. There was some discussion between Flick, Father Tobias and another prisoner, and they left to get something from an alchemist (and this may have been session 1, as I think Scott could not make it to session 2). So while the party splits up (hee-hee), Sir Zay and Stern decide to see what possesses the poor Bill. Stern creates a devil trap so that whatever evil is there cannot escape, and as Sir Zay crosses that boundary to try a laying on of hands he is filled with light and warmth, so pretty sure the trap will be effective. Sadly, not having learned from Sea Wolf, the laying on of hands goes horribly wrong: the guard watch from several steps back turns to ash, nothing left but armor and smoking boots. Unfortunately the paladin and demon hunter both failed their mind roll, and turning to one another, see demons. So of course we attack. And damage each other prior to finally making saving rolls. Looking back at Bill, we see him stretched out really oddly, with black shadow wings. His left hand is ash from reaching through the demon circle, the rest of him clad in midnight shadows. A voice from the darkness addresses Stern: I am Malkeous (sp?), he who slew your parents. Then Bill turns to ash. Malkeous is a vengeance demon, and apparently in this world Dwarves do not believe in magic, so it may kill them when they see it. I may be a tad confused about this point. The Dwarf Creator Goo-Dwa<something....> (obviously sp?) cannot see demons. Dermus, a guard and another guard peek around the corner with wide eyes, trying not to notice the smoking boots. There is a rat holding a large ruby in the cell, and Stern gives it a bit of food and takes the gem: apparently what is left after a demon is vanquished. We are led back up, and we discuss the room where the poison was taken from. Apparently in looking over it, we find a coal chute with kegs of oil, spears and other store room detritus around it. And a trace of pear smell. And the rat we saw in the cell, but not acting rat like. Stern recognizes that this is all that is left of Bill, his essence left over from his possession. And apparently Bill the Rat has a good sense of smell, so we follow the pear smell down the Mount of the castle and after 2, 3 hours of wandering through, under and around Bastian we end up in the Grand Bazaar, a 20 block area where you can buy or sell anything.


Session 3 Flick, following the hints from the prisoner from episode 1, is at the bazaar to get a special mushroom, often used for poison. Meeting a Dragonborn trader (not sure what else to call her) and told to meet in about a gong or so, which is about an hour. This lizard folk may know where to find pears in Bastian, and is willing to trade information for exchange for a building inspection. The warehouse, a couple of blocks away, would give better traffic and less worry about goods getting stolen from her mostly open stall. The owner of the warehouse has been singularly unhelpful about the current occupation of the building. The merchant would trade information for an exploration of the building to see if it is safe.
At this point we get both groups back together. Father Tobias remarks on the rat on Stern's shoulder, but also mentions we've been followed. Being a gregarious story teller, Father Tobias starts a sermon / story while the rest of us dart around a corner alley. We are confronted by what looks to be some serious thugs, though Flick has climbed up the drainpipe and is on the roof above us, somehow hiding in the late afternoon shadows Apparently Sir Zay's religious symbols are an affront, and we are the blasphemous group that needs a lesson in what gods to worship. While Stern immediately attacks and Flick gets ready to leap down from the roof, Sir Zay first attempts to merely parry any attacks, hesitant to attack clergy of any non-evil faith. The attackers apparently to not share that concern. The Devoti of Adament Dawn (sp?) continue their attacks, with Flick killing those on the rooftop with her (along with some good acrobatic rolls, so she is like Robin or Nightwing fighting). Stern just killing left & right, and Sir Zay effectively if late in killing his opponents. Having killed 4 of th 5 attacking us, we discover that they are indeed clerics, but fanatics and not well liked in Bastian. Their leader, Barnabus Hale, has a jade figure of a hawk about 3-3" across, and Flick "checks" the bodies as Stern lays them out and Sir Zay does a quiet prayer for their souls (sorry, did not think of that at game time but in hindsight...) About then some Gargoyles (city guard) come around to see what is happening, and that's where we hear about the fanatics recently coming into the city. The guards were impressed, and will take the bodies to the furnaces. They take some additional notes, Stern mentions Suthiel (sp?), and they leave. Father Tobias is finishing up is amazing story / sermon, and Bill picks up the scent of pears heading north again. He sadly loses the scent a couple of blocks away from the Greenery. It's around 2, 3pm in the Grand Bazaar, and heading north just past the Bazaar and heading towards the Mount (where the Wardens rule) and entering the Jumble, the pricy part of town. Back at the Greenery we see our merchant friend, Kellian Greyscale (sp?) The Sauren (okay, not Dragonborn) is on the verge of saying something but then holds back. But did notice surly men entering the warehouse he is interested in, and they looked formidable. We work out the details of what the merchant is looking for: is the building intact and sound and if it looks to be a good place to move to. A brief view of the building does not show any markings or religious symbols. We also see (I think unless this was a repeat of earlier) 4 or 5 surly, leather men entering the buildings, with bladed weapons.
Eating at a nearby rummary facing the warehouse, Sir Zay gets a clay pot of good ale for a gold (more than the rum was worth, but as a noble we don't pay attention to the little things). The warehouse sits about 10-15 feet above the street, with large loading doors in the front as well as along one of the sides. These 10x10' doors are large enough for wagons to fit through and are covered with metal eaves. The building is about 60x180'. We see some dark garbed men enter, using a key. Robert, our ale seller, knows that the building was owned by old man Cole (sp?). About 2 stories high. 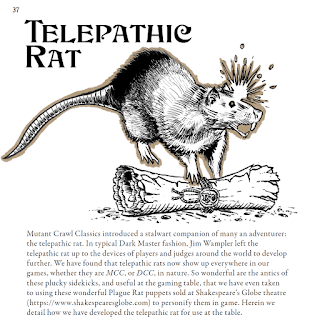