The first gaming session was a bit slow in some ways as we started to explore the characters, and get a feel for what everyone wanted to do.  There are 2 players, and each managed to roll up a character with a ship.  Rather than taking one away, my initial plan for play with a single player borrowed from an adventure I've read about.

Travis, recently mustered out from the Scouts, and Dr. Duk-Lyle, recently retiring from his career at various scientific and medical institutions but most recently from GLIPS (Glisten Institute of Planetary Studies) met in the office of the Scout Director. Alongside was the vice president of GLIPS, with an offer for them both.

GLIPS was to give a lab ship, Le Suroit,  to Dr. Duk-Lak for his years of service and for research.  There were two conditions involved in this: first was the standard contract for returning to Glisten every 18 months to upload any data and research done by the ships crew and scientists. The second was to venture to Selshor, a Red Zone world outside Imperial space, the recover the Katydid, a Scout ship that was lost there.  The official Scout version is that the ship crashed. This contrasts with the story of one of the Scout crew who returned to Glisten believing sabotage was to blame.  The Katydid crashed just six months ago.  Travis will take the Scout as Detached Duty as soon as he can get the ship.

Both accepted the job, and were introduced to Le Suroit, a standard 400 dTon Lab ship. After meeting the crew and the scientists who had also recently boarded, Travis and Franklin headed to Glisten City, to visit the Blue Turtle, a bar Franklin seemed to go to often.  A few drinks later and he was starting to be belligerent to the Naval personnel there; fortunately Travis managed to parley the situation down, and pilot the shuttle back to the lab ship.  In the meantime, Boris was doing any research on the crew and scientists to see if there was going to be any character conflicts or issues he needed to be aware of 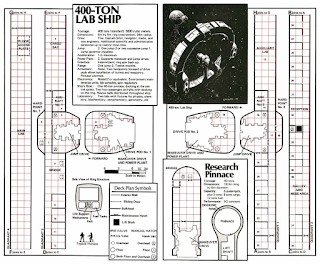 Franklin is the ships gunner, mechanic, security and back up pilot. An ex-Naval officer with a grudge against the Imperial Navy, and cannot apparently hold on to his liquor. A short, young man of 34, he has a relaxed attitude and talks to everyone.

Ferdindando Depallia is a former Naval officer as well, who transferred into the world of diplomacy.  Having a Vilani background as well as coming from noble parents, he is the primary engineer on hand. He has an upper class accent, is always polite, and dresses impeccably. He is also very fond of tradition.

Quenten "IQ" Sotherby is the youngest scientist on board. Seemingly reclusive as he spends a lot of time on his data pad, he can be quite passionate when you get on the subject of archeology.  He entered school after 4 years as a field researcher, he tended to party a bit too much in college.  He did graduate, then joined the Scouts in the Survey branch, and is part of the mission to Selshor.

Purity Truth is the only woman on board, and an Aslan as well. She was the primary investigator at Travis' accident, but is also a scientist, dealing mostly with physics and planetology. She is aloof, has  a low tolerance for light banter, and seems somewhat clumsy.

Dr Francine Occa is the lead planetologist of the science group, and is the Scout to have returned from Selshor.  She went to the Imperial University at Glisten but there was a scandal about a prank gone horribly wrong. She graduated and did 8 years of field research before getting stranded.  She returned, and joined the Scouts, and three years later she crashed on Selshor in the Katydid.

I'll be generating the public NPC dossiers at some point.