Yllom is a world on the edge of Imperial space, a couple of parsecs out from the League of Independent Planets. It has no real Imperial presence other than the port. While the population if just over 9 billion people, there is little conflict. Some historians claim the early settlers were from a peaceful cult that worshipped flowers and the brotherhood of sophonts. Regardless of the origins, the water lily is considered a sacred plant, and most homes have water gardens. There are a significant variety of water lilies ranging in the entire spectrum of colors, and there is artwork on most buildings depicting the eponymous plant. In fact, the various councils each have their own water lily species and color as a representative of that council. It can be seen on official vehicles and quite often lapel pins. Most outsiders tend to think it is a bit excessive, yet colorful and benign at least.

There are 61 councils governing the planet and system (each with its own unique water lily design). While there is a fairly significant law level, the police and military forces are smaller than expected for a population of this size. And they appear to be unfailingly polite even when writing out a ticket. Do not let that lull visitors into a false sense of security, however. They do enforce their local laws with a velvet fist. In fact, the planetary police have a velvet water lily as their logo.

The primary language spoken is Galanglic, although there are a few local dialects that off-worlders may have a difficult time parsing. The population is mostly standard human, but there are several pods of uplifted Dolphins that live and work in the warm world ocean water.

Yllom itself has a bare 2 degree tilt, and seems to have basically a warm summer season all year round. The equatorial region does get warmer than most people enjoy, which may also explain why it also has the most underwater cities. There is one significant continent where more than 3 billion people live in four large cities, including one arcology that houses more than 5 million residents. There are several large islands and hundreds of smaller islands scattered over the planet. Most available surface area is farmed, but most cities also have significant vertical farms that produce almost half of the plant-based foods consumed on the planet. There is also a large variety of fish and water animals that are the primary basis of protein for the population. Strict laws govern the fishing to prevent over-fishing. Yllom has a healthy marine life despite the high population due to the Maine Council's strict enforcement of marine law.

There are rumors of pirate bases operating out of some of the smaller islands. Yllom does have a small squadron of system defense boats based both at the port and a small station at Yllom's third moon with an Argos class station. There is a large contingent of Imperial Inspectors at the port to police goods coming out of the League as well as goods going into the league. There are some cargoes that are proscribed for import or export, and the Imperium tries to keep a close eye on that. The occasional Space Patrol frigate from the League also shows up, tracking down pirates that live on the fringe between Imperial space and the League, or tracking illicit cargo. There have been known cases of sophont trafficking passing through the port, usually via cold berths.

The people are nice, and seem quite surprised about violence. Their entertainment seems to truly revolve around the sacred water lily for the most part. But there are sports, generally non-competitive, as well as adventuresome trips to the deep trenches or the 3 small mountains that have very limited access to keep the few wilderness areas pristine. There is a 3 year waiting period currently for climbing Mt. Shiguou.

Families tend to follow the standard nuclear option, with 2 parents. Families tend to be large as well, with 4 or more children not uncommon. There are a few variants, primarily the line marriage which is more a legal construct than the traditional family. The 9 billion population is also including the population of several large moon bases. With three moons, there is plenty of lunar real estate. The largest moon base, the Living City of S'Kalu on Yllom's second moon, boasts of more than 120 million inhabitants. 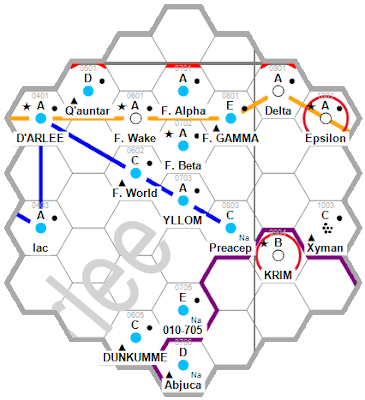 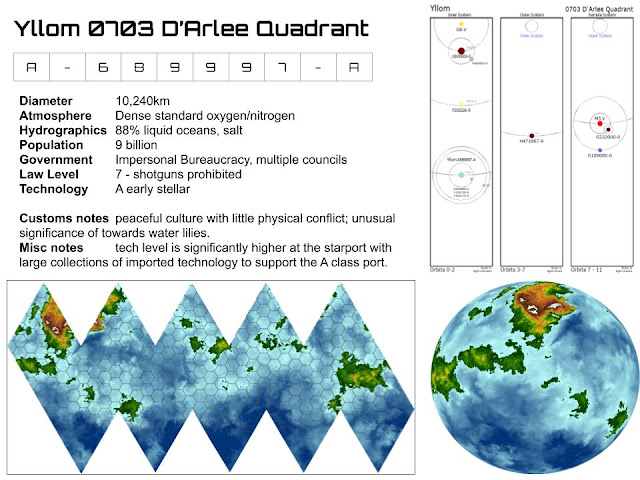