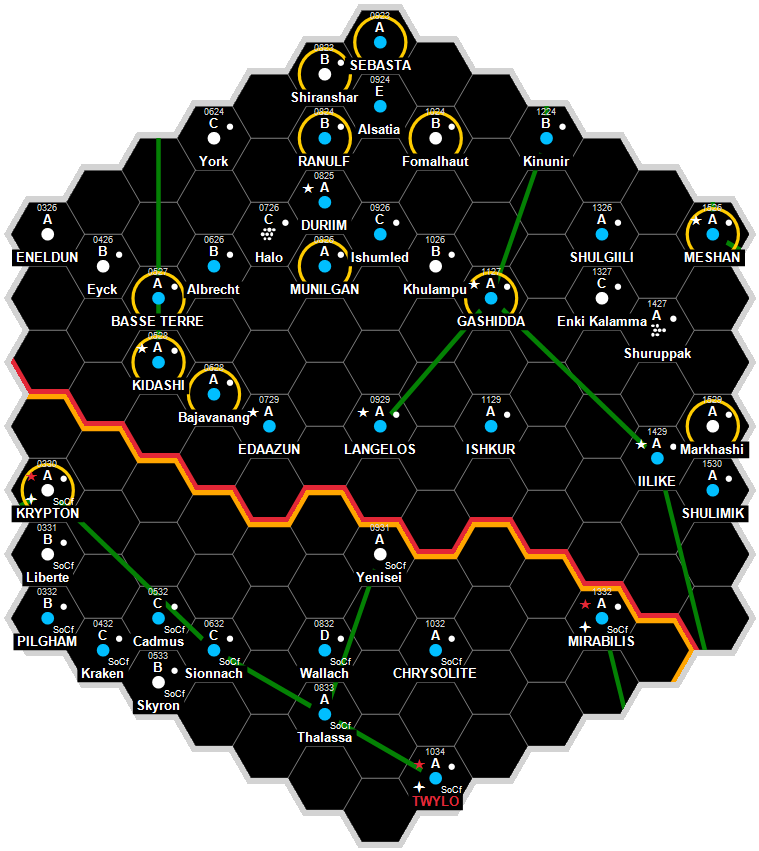 So now I am also a Duke, out of the Solomani Rim. Langelos, to be precise.  So lets take a look at this world I have some domain over.

Starport A - we have a magnificent starport, with all the facilities one could wish for. Being TL F, we can produce any starship currently available in the Imperium.

Size 4 - 6,400 km planet, about the size of Mars.  The natural gravity is about 1/3 Imperial normal. Most populated areas have grav plating turned on to help maintain normal strength and growth. However, large indoor parks and recreation areas often do not have this, allowing for interesting sports.

Atmosphere 2 - very thin and tainted. You will need a respirator and a filter to leave the domes and arcologies.  You will last your endurance in minutes outside without these devices, taking a point of endurance per minute.

Hydrographics 4 - 35-45% liquid oceans. What with the atmosphere, I am leaning towards more ice-covered oceans.  Or perhaps a much earlier Mars-like world.

Population 9 - Billions and billions of people. A large labor force for the starport!

Government A - charismatic dictator.  Don't look at me - I'm just the Duke, I don't actually rule the planet. I am known to make suggestions on occasion though.

Law Level 6 - personal firearms are not allowed. most drugs are illegal.

Tech Level F - cream of the crop for technology. That helps with the soaring arcologies, massive bio-domes, and deep water cities that house our billions of residents.

In addition, there is a Naval base out near the gas giant. They have quite the fueling station there as well as a few smaller posts throughout the system.  Some are left over from the old Rim War, and have mere skeleton staffs to maintain the systems.