I've been building up my random encounter tables for the game. Based on things they have sent in as ideas as well as my own stuff. No real DMs based on location - seems to me like the old Traveller random encounters tables that encounters need to be tailored to where they are happening. That is, closer to towns and things the more likely to encounter people, further out, dinosaurs and, depending on the location, Indians.

Still a work in progress as I sort of think through some ideas for Monday's game. We'll probably have a couple encounters and either near Chisum's or just a day or two out. And hopefully everyone will level up by the end of this session. As I still need to create the big bad for this part, but it won't be as simple as it has been so far. If everyone has not leveled up (and in Apex the progressions differ between classes, as well as potentially even more with stat bonuses if they have them for XP. Not sure anyone has any bonuses for that but I could be wrong. Why I really need a GM version of each character's sheet with basic info on defense, HP, stats, traits)

Based on this map, it took 2 days for them to get to the dino encounter with the Pawnee's herd. A rough gauge says 8-10 days to get where they need to go to "take care of" Chisum. We'll see how that goes as he is a wealthy cattle baron and has dozens of cowboys working for him. Which also means I may need to make some maps of his ranch. Love to make maps.

Basic Encounter - may require another table 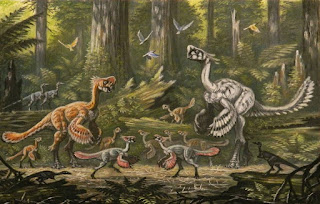