Having spent most of the week bouncing around in the low gravity, hauling a trailer that bounced even higher, it was good to get back to the port. There I found that Captain Laux had managed to somehow get a 6-month contract with some Vargr noblewoman, a Lady Khu and her bodyguard, a rough looking Vargr named Araegougzadharaegougzadh Oerrghingghong. As none of the humans could quite pronounce his name, he said to call him Ara. Even I could see the disdane on his face.

We loaded the herbs up and settled the remaining debts at the port to prepare for lift-off. I walked over to the admin building with the captain and we actually hand-wrote the log info and our destination, the additional cargo we had picked up, as well as our 2 long-term guests. Walking back, I asked Lynwood just how Lady Khu was on Hendar.

"Her previous transport had significant jump drive issues" he said, gesturing to the only other ship at this class C port. There was a lone air/raft sitting next to the engineering section, but I could not see any workers or anything from this distance. "As the local authorities are, shall we say a bit more relaxed, and the No Refunds is in good working order, I was volunteered. There is bonus pay, and this should not affect our routing and trading. Lady Khu is simply on what amounts to a sight-seeing excursion. Apparently, some pack or another are thinking about migrating here. This far from the Extents the Vargr are not overly common, and some remember raiding that some of their corsairs are inclined to do. As we've a bit in the way of protection, as well as being a good deal faster than most merchants, seems we're a good fit to play tour guide. And who knows - it should give you something more to write about."

We entered the ship, walking up the gangway. I secured the ramp and hatches and walked up the stairs to my station behind the bridge, across from Ewo. A few moments later, we were airborne and heading for space. It was nice to be a standard gravity finally. As we were heading to the jump point, sensors picked up a vessel heading in. I hailed them, but other than a curt reply, the crew of the Equity was not very communicative. From the transponder ping, Ewo said that they were a subsidized merchant, probably here to drop off supplies and pick up the half-printed cash for its final preparations and distribution in the league. 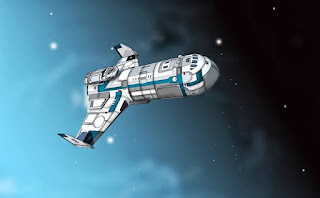 A couple of hours later, we left the real universe and entered jump space. Giving me a week to try & keep her Ladyship entertained and fed.

Well, I managed to get off of Henday, and off to Llamma. I'll do the in-jump rolls and things next post.

Now to see about the wheels within wheels. Why was Lady Khu on Hendar, and is she really doing a grand tour of the League. Putting on my referee hat, let me expand on the as-yet-to-be-defined goings on. Captain Lynwood is a merchant, yes, but he is linked to my old Antares Ship Builders and Traders corporation, which is an Imperial corporation. He owns his ship, and is free to do what he wants. But he does get information and brokers available from Antares which I've yet to touch on. And so far they have been operating almost at a loss: trade is complicated and it is not always easy to make credits: I could not get a good roll for selling those medical supplies (which worked out well: for such a small population, despite literally making money, they probably do not have actual capital for such a purchase.

Lynwood and company are not spies per se, but rather information gatherers and brokers. He does report back to corporate headquarters every 6-18 months, and does gather intelligence on what is going on. He also has contacts which I am going with I've not covered in the game notes so far. Playing solo the impetus for working through plot lines is a lot different than running an actual game (my notes for the Cowboy game are a continued work in progress but so far almost 40 pages. Though a lot of that is copy/paste and images, I do have 2 random encounter tables for the 1st few sessions worked out). Anyway, Lady Khu is actually one of the contacts as she is approaching the League from a different perspective and social strata than our merchants. While she is a Vargr noblewoman, she is also a vice-president of Antares (and now I need to see if I can find my old company hierarchy. I did that after getting Book 6, Scouts, and decided I too could use a company structure). She is gathering high-level trends for trade as well as anything else. Information is also a commodity.

Egg, the Vargr engineer, may be a double-agent. He is ex-Imperial Navy. As such perhaps not as retired as you think. And he may be in cahoots with Lynwood, or just using him to help track the comings and goings in the League. The League of Independent Planets only has a couple high-value worlds, but those are worth watching as some of that technology is coveted by the Imperium.

Next "session" I may have Malik going over the books and see that there is more credits coming in than expected. It also helps that the ship is technically a fast courier / trader. And honestly is not set up for a high passenger at all: the 6 double staterooms are mostly used by the crew. But we'll just fake that for now.

And finally - I've been trying to us a hex map program, Hex Kit, for the GM maps so that I can have encounters and things mapped out. I was reading an interesting blog post about mapping in games, and that you have 2 maps. The pretty (and incomplete) players map that just the relationships between places but won't have all the details. And the GM map which has a scale and all that so you can tell exactly where the players are and what they should be encountering.

Anyway, Hex Kit does have some nice desert type things, and I just downloaded another tile set and saw it had a dinosaur in it! Perfect for encounter marking for the Cowboy & Dinosaur game. That would be starting in a couple of weeks.
And my initial notes & encounter tables for that section of the desert (or perhaps anywhere in the desert, not just this particular spot)

The trail is relatively fresh, but will take a few hours to follow to the bandit’s camp. I may want to roll for some random encounters on the way for those on foot/dino/horse: